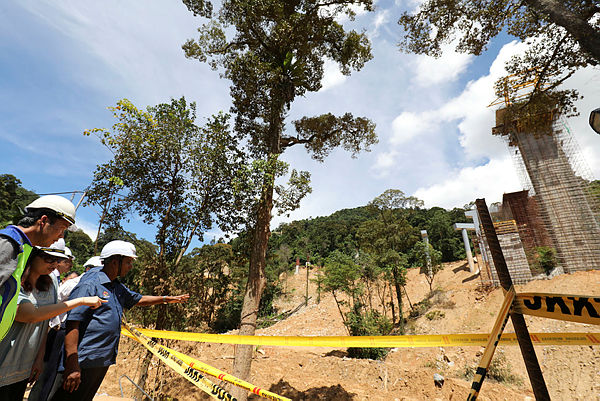 Filepix taken on Oct 25, 2018 shows the site of the landslide at Bukit Kukus. — Sunpix by Masry Che Ani

GEORGE TOWN: The contractor for the Paya Terubong paired roads project in Jalan Bukit Kukus near here was fined RM22,000 by the Sessions Court here after pleading guilty to two charges of failing to provide safe work procedures.

Judge Mazdi Hamid sentenced Syarikat Yuta Maju Sdn Bhd which was represented by its director, Osmera Mamat after he changed the plea to guilty during the proceedings in court today.

The case should have been heard today.

The court fined the company RM20,000 for the first charge and ordered Osmera who is the accused in the case to serve two months in jail in lieu of the fine and a fine of RM2,000 or two weeks jail for the second charge of the company.

For the first charge, the company as the employer was accused of failing to ensure the practical safety, health and welfare of its workers and failing to provide safe work procedures for using a crane which resulted in falling beams at the construction site of the Paya Terubong paired roads project at 8.30pm on Oct 11 2018.

The company was charged under Section 15 (1) of the Occupational Safety and Health Act 1994.

For the second charge, Yuta Maju which was the main contractor appointed by Penang City Council (MBPP) for the project was accused of failing to appoint a competent safety and health officer at the project site.

Meanwhile, at the same the court Judge Mazdi set Feb 19 for the hearing of the case faced by Osmera and the company’s project director, Lai Sin Kian who were facing an amended charge of failing to provide safe work procedure resulting in the landslide at the project site in Jalan Bukit Kukus at 1.50pm on Oct 19 2018.

According to the amended charged Lai was accused of failing to provide engineering calculations by an accredited engineer for earth backfill works for a temporary slope, which resulted in the landslide on Oct 19 2018.

Yuta Maju was represented by Osmera as the employer under the same charge.

They were charged under Section 15(1) of the Occupational Safety and Health Act 1994 which carries a maximum fine of RM50,000 or two years jail or both upon conviction.

The landslide at the paired roads project site on Oct 19 2018 took the lives of nine foreign workers and injured four others while one was missing. — Bernama