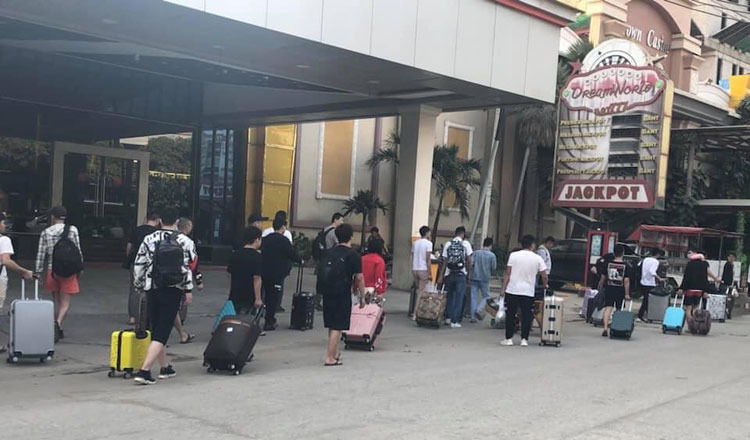 Gamblers leave a casino in the kingdom ahead of the enforcement of an online gambling ban. — Facebook

PHNOM PENH: Scores of casinos have abruptly closed ahead of inspections on online and arcade gambling operations across Cambodia as a ban comes into effect.

Cambodian Prime Minister Hun Sen in August issued a directive to ban all online and arcade gambling in the Kingdom by the end of this year. He noted some online gambling operations rigged their games and threatened those who are not able to repay gambling debts.

The department said 20 to 30 more casinos in the kingdom ceased operations and decided to move outside of the Kingdom, causing unemployment among casino workers and the departure of gamblers from the country.

Ros Phearun, deputy director-general of the ministry’s financial industry department, yesterday said the ministry predicts 80% of the 136 casinos in the Kingdom will shut down.

“We have seen more than 30 casinos shut down and more are going to do so in the near future,” he said. “They are forced to shut down because they are losing income [due to the ban]. We believe that in 2020, some big casinos will shut down, too.”

Phearun said some casinos which were not running online and arcade gambling operations were forced to shut down because the number of gamblers has decreased following the ban.

“Some casinos that did not run online gambling still closed because the number of customers declined,” he said. “They invested a lot, but now get less income. They cannot support the huge number of workers who worked for them. Like it or not, this is because of the influence of the ban on online gambling.” — Khmer Times