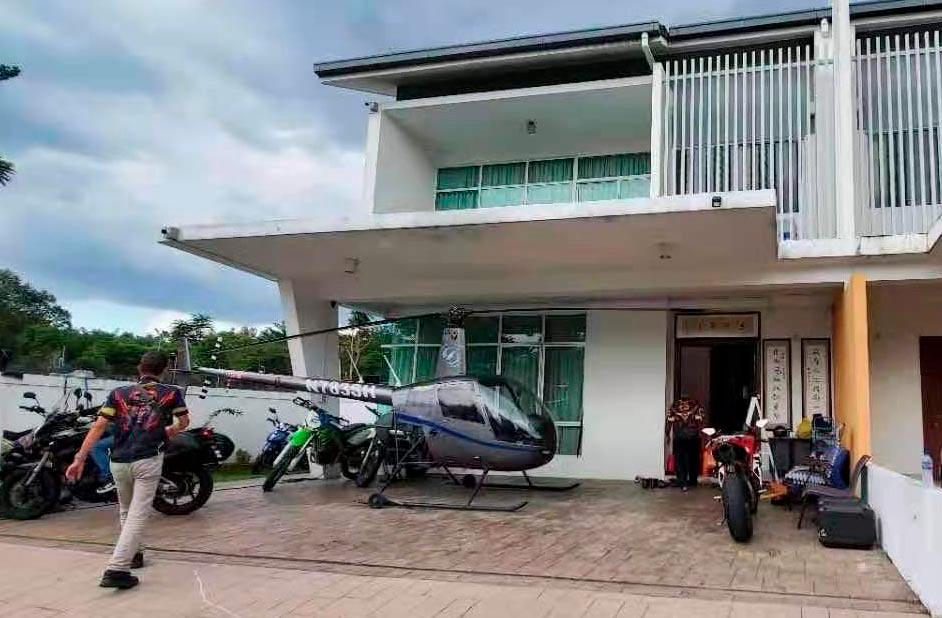 PETALING JAYA: A businessman with a Datuk Seri title courted more than astonishment from his neighbours when he parked a helicopter in front of his house (pix) as if it was a car at a plush residential are in Bandar Kinrara, Puchong on Wednesday.

A neighbour who was not amused by the presence of the Robinson R22 two-seater light helicopter confronted the aircraft owner, businessman Datuk Seri Paul Lim, before an altercation erupted between both men at the Palmiera Residence on Wednesday night.

A video of the confrontation which was recorded by a bystander went viral in the social media yesterday leaving amused netizens who saw the parked helicopter in awe.

In the video, the neighbour, a businessman who owns factories and is also a Datuk, accused Lim of being a “show off”.

Both men are seen shoving each other before a younger man believed to be a family member of Lim breaks up the fight.

theSun contacted Lim yesterday and learnt that apart from running tow truck and aircraft-for-hire services, he was also involved in the business of extreme sports such as paragliding and skydiving.

“I had brought the aircraft by road on a tow truck on Tuesday and parked it inside the compound of my house as I wanted to use it to shoot an advertisement. It is not like I flew it into my house nor was it obstructing anyone’s house. I was celebrating my birthday and later my relatives wanted to take photos and my neighbour suddenly got upset. He has since apologised to me for his outburst and the matter has been put to rest.” he told theSun.

Lim said the management of the gated community was also opposed to him parking his helicopter at his house and had lodged a police report.

He said Serdang police had come over to his house and found that he had not committed any offence by bringing the helicopter over.

Lim said he intends to ferry the helicopter back to his hangar at Subang Airport on Friday.

1.Siti Bainun fails in bid to regain custody of one of her adopted children