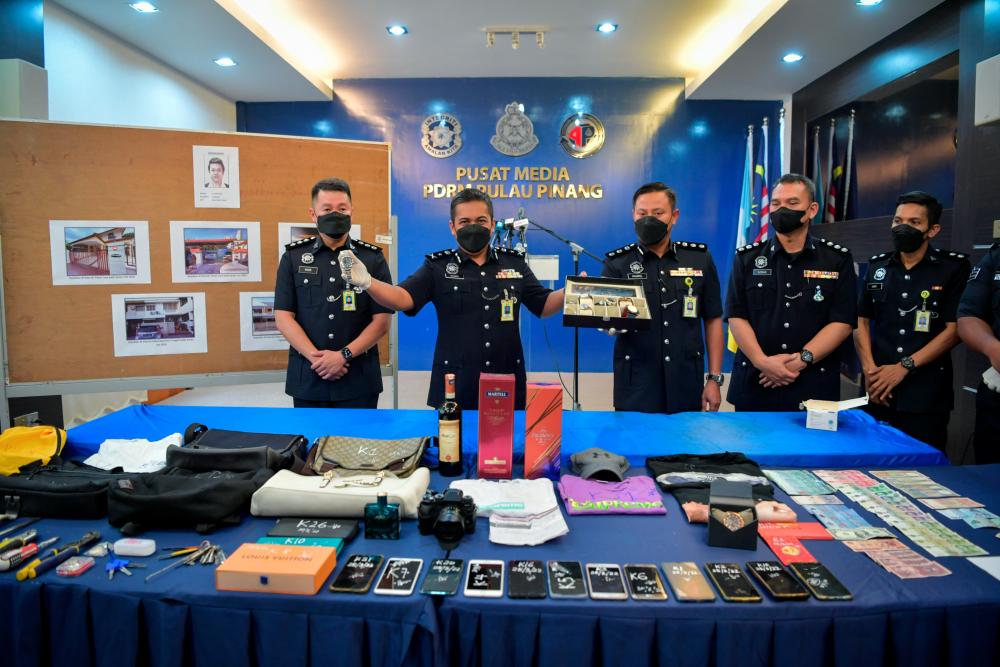 GEORGE TOWN: Penang police have busted an interstate housebreaking gang with the arrest of six individuals in raids in Kulim (Kedah) and Kuala Lumpur recently.

Penang Criminal Investigation Department (CID) chief SAC Rahimi Ra’ais said in “Ops Pintu Mutiara”, his team received a report from an investment agent, whose house in Air Itam here had been broken into on Feb 26. The man suffered a loss of RM50,000.

“Following this, we conducted intelligence and surveillance work before raiding a house in Kulim. Four men were detained at approximately 10 pm on March 25 and subsequently, we arrested two other men in Kuala Lumpur at about 11 pm on March 30.

“All the suspects, aged between 34 and 47, including the mastermind, aged 45, had 45 previous criminal and drug-related records,“ he told the media today.

He said that based on the investigation, the gang members knew each other as they had served jail time together before actively carrying out housebreaking activities since the beginning of this year, not only in Penang but also in Kedah, Perak, Pahang and Kuala Lumpur.

He said the investigation revealed that the gang had planned in advance which houses they intended to hit, choosing houses where residents lived alone or were rich senior citizens in urban areas.

He said the gang’s modus operandi was to use master keys and a “kuku kambing” (a padi-planting tool) to pry open the door of the house before fleeing with various valuables, especially branded watches, jewellery and cash.

“Following the arrest of the gang members, police seized two cars, 11 watch straps of various brands, 12 mobile phones, 45 pieces of local currency and 30 pieces of foreign currency, as well as a camera.

“The police believe that with the arrest of the six men, they have solved 14 burglary cases. including eight in Penang while the rest were in Kedah, Perak, Pahang and Kuala Lumpur.

“The eight cases here involved a loss of RM200,000 but we believe more cases have been uncovered following the arrest of gang members. Police are also tracking down several other members of the syndicate who are still at large,“ he said.

He said the six men, among others, had worked as contractors, car painters, mechanics, and sold clothes online with four of them testing positive for drugs and one was wanted by Selangor police in connection with a drug case. He also said that police are also tracking down a man known as Lo Bin Sun, 39, or Vincent who is believed to be a member of the gang.

“All of them (gang members) have been remanded until tomorrow to assist in the investigation and the case is being investigated under Section 457 of the Penal Code,“ he added. — Bernama