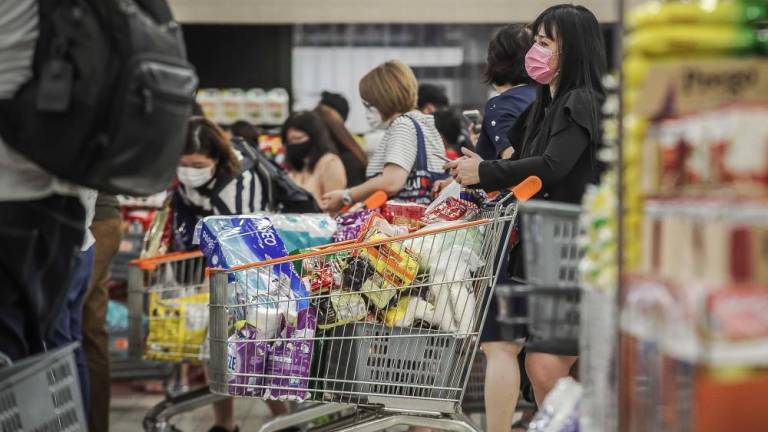 KUALA LUMPUR: People around the Klang Valley can breathe a sigh of relief as there are still other supermarkets which can provide a sufficient supply of goods during the March 18-31 duration of the government’s Movement Control Order aimed at containing Covid-19.

In announcing the nationwide order Monday night, Prime Minister Tan Sri Muhyiddin Yassin had urged Malaysians to be calm, giving an assurance that there was enough food for everyone.

Agreeing with the Prime Minister’s statement is NSK Trade City Supermarket branch manager Edward Leong who said daily essentials such as rice, flour, sugar and cooking oil at his supermarket were adequate for domestic demand.

“There was a sudden increase in visitors at the supermarket yesterday following a sharp spike in Covid-19 cases. We usually receive about 2,000 customers, but yesterday, we recorded some 6,000.

“If you look at the buying trend, there has been an increase in purchases since yesterday, resulting in three days of rice stock reducing to one day’s worth of stock. However, we assure you that we will always have a sufficient stock of products such as rice,” Leong said.

Meanwhile, checks by Bernama found that people are continuing to flock to supermarkets in several locations to purchase essential items, resulting in congestion at entrances and payment counters.

Rani Kuppusamy, when met by Bernama at NSK Trade City Selayang, said following the announcement of the Movement Control Order last night, she decided to immediately visit the supermarket, fearing that goods would soon be out of stock.

“I quickly grabbed necessities but never expected that so many people would come here and scramble to get their products. The entrance was crowded and parking was difficult too,” said the 65-year-old housewife who explained she had done her best to attend to her family’s needs.

Another grocer, Rabiah Mansor, 76, said she also rushed to stock up on essentials and other groceries to prepare for any eventualities.

“I have also been advising my children and grandchildren to practice good hygiene and avoid large gatherings,” said the full-time housewife.

Bernama checks also found several enforcement officers from the Domestic Trade and Consumer Affairs Ministry conducting inspections of nearby grocery shops to ensure stocks were sufficient and that traders were complying with the prices stipulated by the government.

Meanwhile at AEON AU2 Setiawangsa, Bernama found jittery shoppers had flocked to the supermarket to stock up on supplies in big quantities.

According to a civil servant who asked to be referred to as Maznah, she was prompted to buy essential items in large quantities as she was not certain as to when the outbreak would end.

“There are 10 people in my family, so I need to purchase items in large quantities, and I need to be prepared to face any possibility. The stocks I purchased will be enough for a month,” she added.

Retired teacher, Suhaila Adnan said panic-buying shoppers would only cause supermarkets to be in a situation where they would be unable to provide goods for all customers.

“I think the panic buying was an unreasonable act by consumers. For sure, many people will scramble to purchase cheap items, leaving the expensive items for other buyers. Please think about the less fortunate ones who cannot afford to buy expensive items,” she urged.

A check by Bernama also found that basic essential items such as rice, cooking oil and chicken were among the best-selling items, with supermarket workers having to restock them several times yesterday.

A worker, Hani, said although today’s situation was more relaxed compared to yesterday, she and her friends were still hard at work replenishing empty shelves with items, and arranging them.

“Usually, we will restock in the night, but since the spread of Covid-19, we have been forced to continuously restock. I hope people stop panic buying and only buy essential items in moderation so that there are sufficient goods for all,” she said. - Bernama