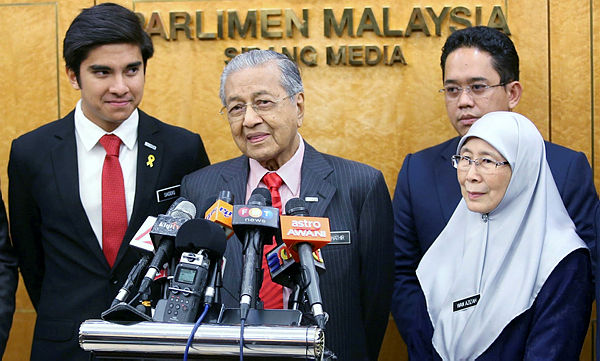 KUALA LUMPUR: Prime Minister Tun Dr Mahathir Mohamad described the amendment to the Federal Constitution as an historic moment for the country, reflecting total bipartisanship from leaders across the political divide.

“For the first time in history, we have achieved bipartisanship, and this is an achievement for the people of Malaysia,” he told reporters during a press conference at the Parliament lobby today.

A total of 211 of 222 MPs voted for the Constitution (Amendment) Bill 2019, which surpassed the two-thirds parliamentary majority of 148 needed to amend the Federal Constitution. Eleven MPs were not present for the vote.

Mahathir then extended his appreciation to all parties, including the Opposition, for supporting the Pakatan Harapan government’s second bid to amend the constitution.

“This is a new era, where even the opposition can see the benefit taken by the government,” Mahathir added.

When asked if there was a need for a two-thirds majority in the Dewan Negara, Mahathir replied that it was not necessary.

Mahathir also assured that those above the age of 18 who have yet to register under the old system would also be eligible to vote.

Meanwhile, Youth and Sports Minister Syed Saddiq Syed Abdul Rahman, who was present during the press conference, credited the prime minister and ministers for the successful passing of the amendments.

“If there are more people saying that a 94-year-old cannot fight for the future of the youth, let this be clear evidence that at heart, he (Mahathir) is younger than a lot of us, including myself,” he added.

“Following discussion, Mahathir agreed to retract the government’s earlier bill and replace it with a fresh one that incorporated the opposition’s requests and we don’t have any issues since then,” he said.

Opposition parties had called for Malaysians to be automatically registered as voters upon turning 18, and for the minimum age of election candidates to be lowered to 18.