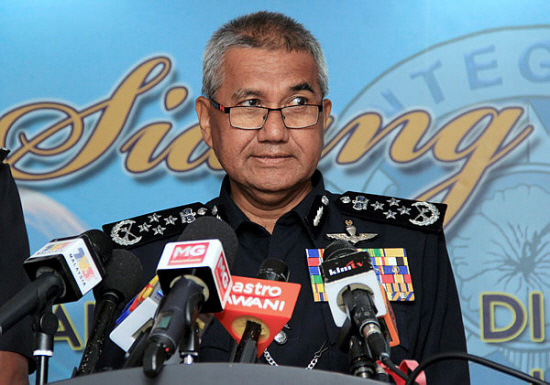 The Abu Sayyaf Group is notorious for its kidnapping-for-ransom activities in the Southern Philippines and Sabah.

Inspector General of Police Tan Sri Mohamad Fuzi Harun (pix) said that the suspects comprising seven Filipinos, and a local were arrested in Putrajaya and Sabah between Oct 30 to Nov 12.

A blacksmith of Philippine nationality was nabbed in Kinarut, Sabah, on Nov 10 and was said to be a senior member in Abu Sayyaf.

“The Fillipino suspect aged 30, is a commander and the right-hand man of Furuji Indama a senior leader of the ASG, said Mohamad Fuzi.

He also added that another Fillipino who was arrested two days earlier (Nov 8), was a child militant recruiter for the ASG.

“The suspect was in charge of recruiting children to join the ASG to be used as “human shields” in battles against the Philippine military at Basilan, Southern Philippines.

“The suspect also played a part in the beheadings of several hostages held by the Abu Sayyaf Group” he added.

He was arrested in Ranau, Sabah on Nov 8 with another countryman as they were planning to flee to southern Philippines to avoid arrest by the Malaysian authorities.

Earlier on Nov 3, the police had detained three Filipino members of the ASG in Tenom, Sabah. The men, aged 27, 34 and 51, worked as labourers.

“One of them, a 34-year-old, has the expertise of producing firearms to be used by the ASG,“ said Mohamad Fuzi.

On Nov 12, a 60-year-old Filipino was arrested in Tenom, Sabah, for allegedly sheltering a suspect hunted by the police.

The local suspect, a 38-year-old who worked as an agent selling gold bars, was detained in Putrajaya on Oct 30 for alleged involvement in terror activities.

“He was involved in channelling funds to Akel Zainal, a Malaysian who joined Daesh (Isis) in 2017 for the purpose of financing terrorism activities,“ said Mohamad Fuzi.

All the suspects were arrested on suspicion of committing offences relating to terrorism, under the Penal Code (Act 574) and will be investigated in accordance with the procedure under the Security Offences (Special Measures) Act 2012 (Act 747).