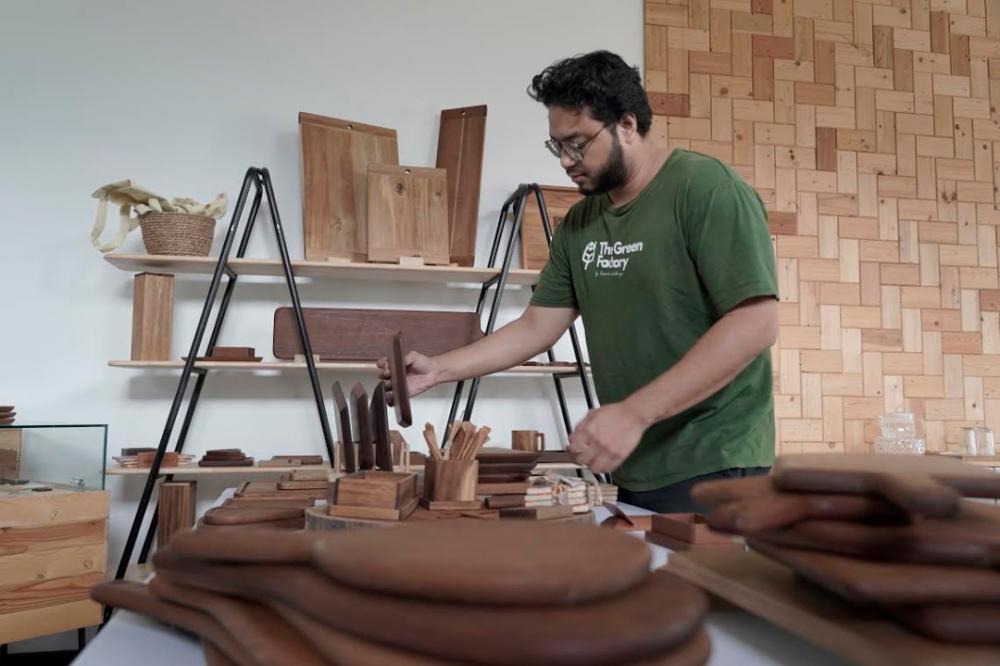 INSIDE a single-storey building in Kampung Baru Ampang, youngsters in green T-shirts are carving waste wood into toys and varnishing them.

Every piece is shaped to perfection.

This is the Persada Gallery, a workstation and gallery where 15 apprentices come under the tutelage of “green” carpenter Harith Ridzuan. (pix)

Going into the woodworking business was a natural progression for Harith. His family owned a furniture making business called One Tech (M) Sdn Bhd and being the eldest, he was the obvious choice to take over from his father.

But Harith had other thoughts. Rather than carrying on the family tradition, he decided to take the woodworking business on a different path – going green. But it was not a path he would take until much later.

His childhood days were mostly spent at his parents’ factory in Sungai Buloh.

“By age 10, I was already an extra hand on the factory floor. During the school holidays, I had to work while other children played,” Harith told theSun.

As expected, he begrudged it.

“My father expected me to familiarise myself with the machines, the operations and the people. I used to dread the holiday routine, and I resented my parents for not letting me have a normal childhood,” he said.

As a teenager, he would tag along with his parents on international furniture exhibitions. He recalled with glee a trip to Budapest.

“Some of the visitors could not speak English, which made communication a challenge,” he said with a laugh.

But now, Harith realises the value of the exposure to the business his parents had given him.

When he was old enough to forge his own path, he decided to take the family business to a new level by going green.

Through his own company called Harith Green Carpenter, he emphasises on sustainability.

“The old business model has often been linked to deforestation,” he pointed out.

“I would look for discarded wood in dumpsters that I would later recycle into small furniture pieces,” he said.

“My mother wasn’t too happy with me bringing in trash. It’s understandable given that it was a new area to explore. How do you create profit from an untried business model?”

He continued his experiment with recycled material and greener processes in timber manufacturing but it was not until 2012 that interest in his products began to show.

Then, hipster cafes with a sustainability theme had became trendy.

His furniture and, even more so, his green concept caught on, and he began to craft furniture and do small-scale interior decorating for such establishments.

At Harith’s workshop, nothing goes to waste. Every odd piece most would throw out as wastewood would be turned into items such as phone holders.

“We have sold thousands of these as corporate or novelty gifts,” he said.

Even wood shavings found new uses. Harith packs them in bags that he sells for RM10 each. These shavings are used in nurseries for composting and animal bedding.

The latest reincarnation of the by-products from his workshop is a wooden “sponge” that can be used to absorb spilled chemicals or to replace bubble wraps when packing small items.

Products from Harith Green Carpenter are now certified “green” under the Programme for the Endorsement of Forest Certification. To ensure compliance with international standards, the products are audited annually by an international organisation based in Switzerland.

His products are now sold in Europe, Japan and South Korea.

But to achieve total sustainability, the business model will also have to change. To that end, Harith has a simple motto. He will change the world “one product at a time”.