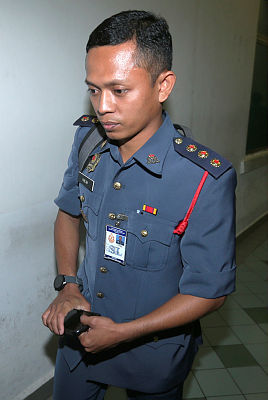 Prosecution witness, Abdul Halim Zulkefeli from the Fire and Rescue Department arrives at the Shah Alam High Court to give his testimony in the Crade Fund CEO case — Bernama

Abdul Halim, the 15th prosecution witness in the murder trial of Nazrin, said the two places, namely, on the mattress as well as on Nazrin’s head, and they had nothing to do with each other.

“There were traces of burnt objects on the victim’s chest and on the head but I could not determine what the objects were,” he said when replying to questions from Selangor prosecution director Datuk Salim Soib@Hamid before Justice Datuk Ab Karim Ab Rahman.

Abdul Halim also told the court that during an examination on Nazrin’s body, he found no injuries and soot stains on the back of the victim’s body except two puncture marks and blood stains on his head.

“Therefore, I am of the opinion that before the fire incident occurred, Nazrin was already lying in the area where he was found (on the mattress) based on the absence of soot stains on his back.

“I also found there was no signs of the victim trying to escape the fire as his body was found at the point of origin,” he said.

Abdul Halim said the investigation also found that the victim had not made any attempt to escape the fire based on the condition of the room during investigation.

This was because he said, based on his experience as a firefighter, fire victims would usually try to escape by hiding in the bathroom or closet and trying to get out using the door or the window.

“However, in this case, there was no signs found on the door, whether he was trying to break it from inside or trying to hide in the closet. If he (the victim) tried to break the door, we would have found the body near the door, not on the mattress,” he said.

Abdul Halim also told the court that victim could get help if he was conscious when the fire broke out.

“Looking at the nature and effects of the fire, the size of the room and the place where the fire originated, if the victim was still alive he could have come out safely,” he said.

On March 12, Samirah Muzaffar, 44, a former senior executive at the Intellectual Property Corporation of Malaysia (MyIPO), and two teenagers, aged 17 and 14, were charged along with an Indonesian citizen, Eka Wahyu Lestari, who is still at large, with Nazrin’s murder.

They are charged under Section 302 of the Penal Code, read together with Section 34 of the same act, which provides for mandatory death sentence if convicted.