Flood evacuees in Kelantan, Terengganu increase to over 15,000 this morning 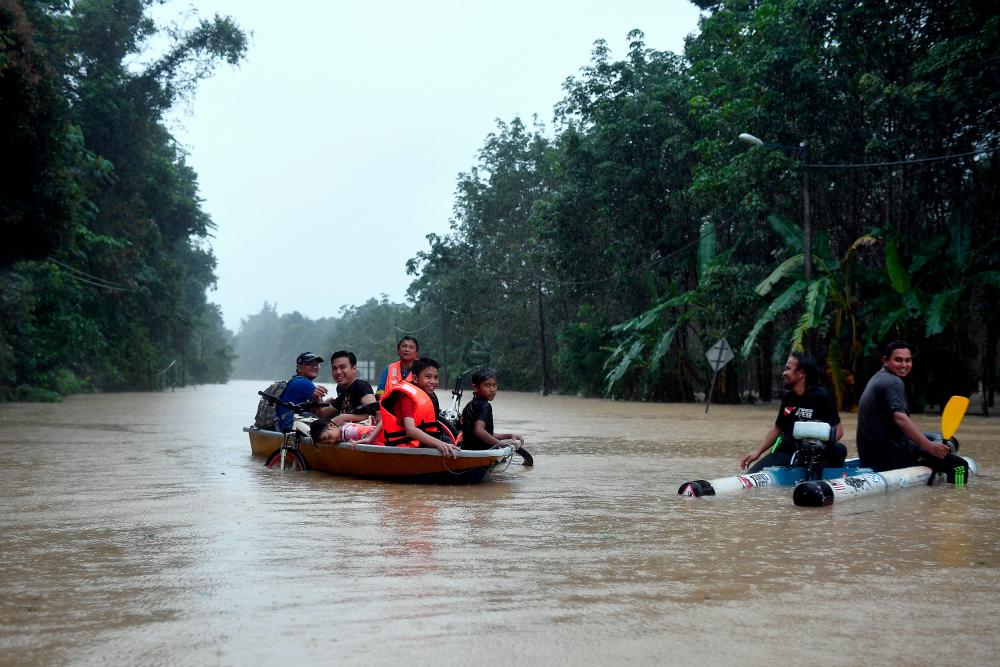 Flood victims use boat to commute from Kampung Bukit Payung to Kampung Keruak after the road connecting the two villages was cut off due to floods on Dec 2, 2019. — Bernama

KUALA LUMPUR: The number of flood evacuees in Kelantan and Terengganu continues to increase to 15,126 involving 4,901 families this morning.

The ebanjir.kelantan.gov.my website showed that the level of Sungai Golok in Rantau Panjang dropped by 0.3m to 10.58m from 10.61m last night. However this is still above the nine metres danger point.

No closure of major roads was reported and the floods have so far claimed two lives.

State Civil Defence Force director Lt Col Che Adam A Rahman said Kuala Terengganu was the latest district to be hit by floods last night and currently 22 evacuees (four families) are at a centre near Manir.

“Besut, remains to be the worst affected area, with the number of centres unchanged at 51 where a total of 1,879 evacuees from 503 families are being placed.

Meanwhile, the Department of Irrigation and Drainage via the http://publicinfobanjir.water.gov.my/ portal reported that only the Sungai Nerus in Kampung Langkap had exceeded the danger level of 21m this morning, at 21.23m.

In Johor, the number of evacuees in Batu Pahat remained at 52 as at 8am today.

All evacuees are being sheltered at Sekolah Agama Seri Comel, which had opened since Sunday evening.

According to him water level at the inundated areas had dropped. — Bernama