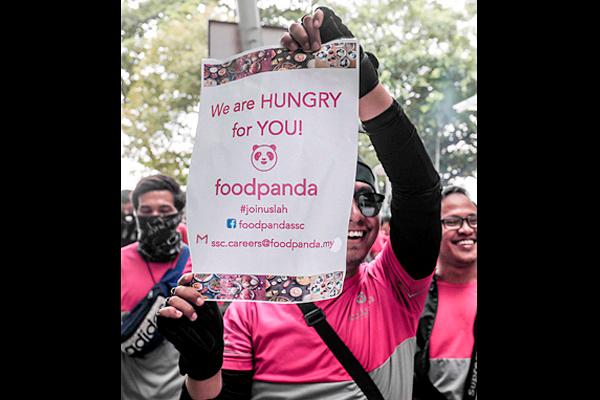 A Foodpanda rider holds up a poster during their ‘stop work’ protest. – Sunpix by Ashraf Shamsul

KUALA LUMPUR: A four-and-a-half-hour protest was all it took for Foodpanda riders to get themselves a better deal.

The meals delivery service provider has agreed to revert to its previous payment scheme that promises higher income for the riders in Selangor.

Similar protests were held in Johor and Penang, and more have been planned for Malacca, Sabah and Negri Sembilan but it is unclear if the riders there would be given the same deal as those in Selangor.

Under the new payment scheme that was introduced on Sunday, Foodpanda riders are paid RM4 an hour. Over and above that, they are paid RM3 to RM5 for every delivery made but the quantum is based on their performance. It is unclear how the performance is measured.

However, the riders were unhappy with the change, fearing that their income would be significantly reduced.

At yesterday’s protest, they demanded a reversal to the old payment scheme, a demand that was met at a meeting between the Foodpanda management and five representatives of the riders.

Under the old scheme there was no hourly payment. Instead, the riders were paid RM4.50 to RM7 for every delivery made. If they completed at least 60 hours of work a week, they were paid an additional “bonus” of RM100.

Under this scheme, riders who are able to make at least three deliveries an hour can expect to earn up to RM630 if they work at least 30 hours per week.

More than 100 riders turned up for the protest outside the company’s headquarters at the Southgate Commercial Centre here yesterday.

One of them, Mohd Hakim Ishak, 20, said if the company had insisted on continuing with the new scheme, the riders’ income would be reduced.

One of the riders’ representatives, Siddiq Nadarul, who was at the meeting with the company’s officials, said Foodpanda had given a guarantee that the new scheme would not be implemented in the Klang Valley.

He expected the riders from the other states would have to negotiate their own terms with the company.

Attempts to reach the company for comment were unsuccessful.

It is unclear how badly the food delivery service was affected by the protest, given that it began at 11am when orders for lunch would have been at its peak. It eventually ended at 3.30pm.

Apart from Foodpanda, another big player in the food delivery service is Grab Food, the same company that also provides ride-hailing services.

Others include Dahmakan, Shugun2U, Honestbee and DeliverEat.