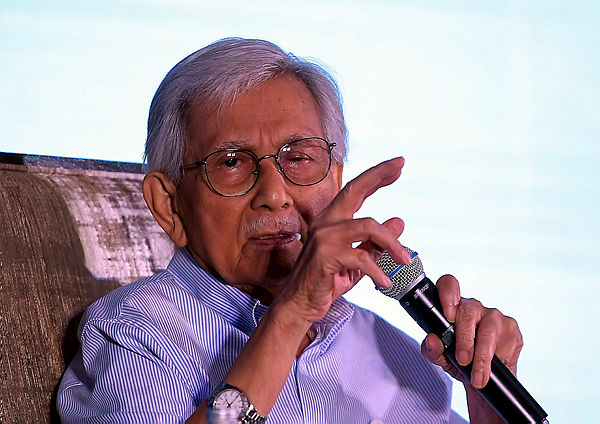 PETALING JAYA: The government has to look at new measures to bring down food prices next year, Economic Advisor to the Government Tun Daim Zainuddin said yesterday.

He called for the bureaucracy of ministries and agencies to be reduced to improve the delivery efficiency and create a simpler way of doing business in achieving this aim.

“What is important is that we have a healthy life. (When) the cost of living goes down, productivity goes up and income goes up. So, everybody (is) happy,” he said at the 29th Tunku Abdul Rahman Lecture yesterday.

The Federation of Malaysian Consumers Associations (Fomca) concurred, saying the government must bring an end to all monopolistic practices to bring down the price of essential items.

Its chief executive officer Datuk Paul Selvaraj said this must be tackled not only at just one end but at every part of the supply chain process. He said the country imports most of its food and any small variation can have a big impact on lower income families.

“By preventing monopolistic practices, it will have an impact on price of goods which will see lower prices,” Selvaraj told theSun.

He pointed out that higher income families spend 10% to 15% of their money on food as opposed to the 30% to 40% spent by those in the lower income bracket.

“The income disparity in urban areas is so high that some families do not earn enough and they have to borrow money to make ends meet,” Selvaraj said.

“The World Bank suggested that the price of goods should vary from location to location and state to state.”

He said this would require a multi-strategy approach as suggested by the World Bank report, with price variations based on location.

Selvaraj said it would be difficult to implement price control throughout the year because a lot of food items are imported and we have no control on the changing prices.

The World Bank’s lead economist in Malaysia, Richard Record, said the term “cost of living” varies significantly from one class of consumer to another.

“Closer analysis shows that despite low and stable inflation in recent years, different households live with different rates of inflation.

“For example, those with lower incomes spend a higher share of their family budget on food, and so will experience a higher rate of inflation when food prices rise faster than prices of other items,” he said.

Record said Malaysians’ long-standing difficulty in making ends meet was unsurprising when these factors existed in combination with a generalised approach to addressing rising costs.

He said there is a need for structural reforms to directly address the root of each problem rather than their symptoms.