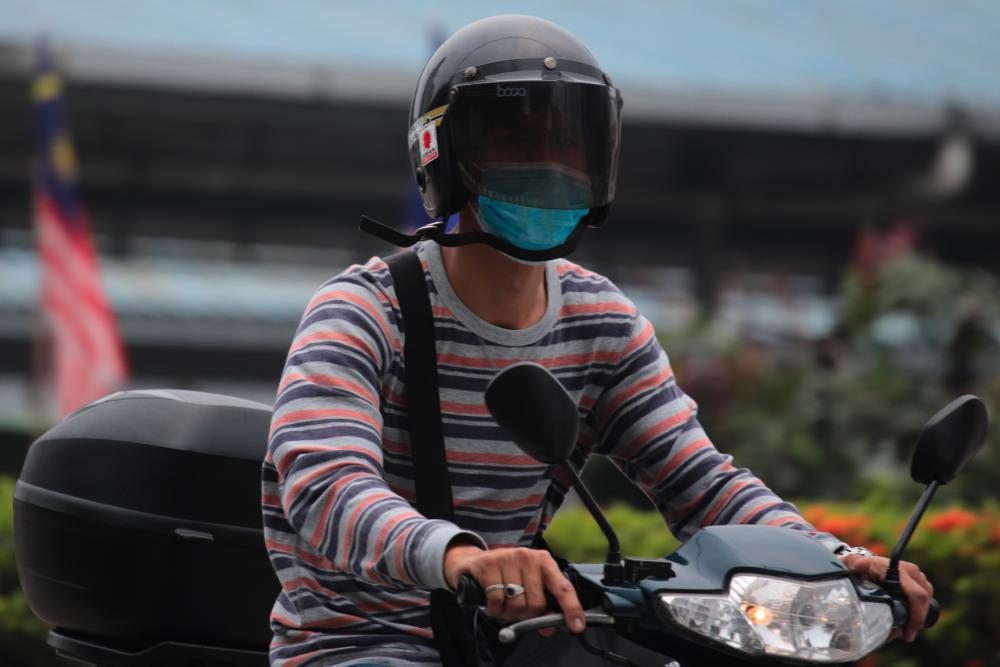 KLANG: The hazy weather which has swept the country since last week has led to face masks flying off the shelves of pharmacies.

Although there are various types of face masks available in the market, only the N95 type is recommended by the Ministry of Health (MOH) as it is more suitable for use during the haze as it prevents at least 95% of the small microbial particles of up to 0.3 microns from entering the respiratory tract.

A Bernama survey of several pharmacies around Shah Alam and Klang found that pharmacies started adding N95 type nose and mouth stock following high demand from the public as the Air Pollution Index (API) readings in the two locations went above 200 as of noon, indicating very unhealthy conditions.

A sales assistant, who declined to be identified at a pharmacy in Section 7 Shah Alam, admitted that the N95 face masks were most sought after by customers despite being sold for RM6 per unit - the ceiling price set for the controlled item.

“The demand (for N95 face masks) may be high due to the severe haze conditions, and even the stock we just received from the supplier today morning was almost sold out by noon. So far, our pharmacy has not been short on supplies ... let us see how it is in the next two or three days,“ he told Bernama yesterday.

The Selangor Ministry of Domestic Trade and Consumer Affairs (KPDNHEP) when contacted said that it had not received any complaints of the N95 face mask being out of stock or unavailable.

Selangor Health Director Datuk Dr Khalid Ibrahim also encouraged the public to use the N95 face mask as it not only filtered most of the haze particles, but could also be re-used for a longer period of time.

However, he said surgical face masks could still help protect users by preventing larger particles, but with a lower level of effectiveness.

Surgical masks can only filter 12% of haze particles as small as 2 to 3 microns, however, they are much cheaper than the N95,” he said.

He added that people, especially in areas with high API readings were advised to use appropriate nose and mouth covering such as the N95 face mask throughout the haze season to avoid any adverse effects on health.

According to the Department of Environment’s website, as of 6pm, the APIs in three areas around Selangor were very unhealthy, namely Shah Alam (216), Petaling Jaya (207) and Johan Setia, Klang (258), while another three locations, namely Klang (198), Banting (180) and Kuala Selangor (192), were deemed unhealthy.

In Perak, pharmacist Hairuniza Mohd Padil, 37, in Seri Manjung, Lumut, said many customers bought surgical face masks because they were easy to use, including for children.

“In fact, the public does not know the difference between the two masks (surgical and N95) so if in the current haze situation (unhealthy), it is best to use the N95 face mask.

“Most customers who buy the N95 face mask also admit that they are getting it after reading information on social media saying it can filter dust or small-sized particles more effectively than surgical masks,“ she said when met by Bernama yesterday.

He said strict action would be taken against traders who took advantage by raising the price of face masks throughout the haze season, and so far, no notices or compounds had been issued to traders.

“We have been monitoring and inspecting them from the beginning to make sure that the N95 face mask, especially the N95 type, is good enough and that no traders are taking advantage of selling it at a high price,“ he said when contacted by Bernama.

Mohd Ridzuan said the retail prices for face masks used for medical purposes and surgery were set at between 20 sen and 80 sen per unit, with the difference in price depending on the mask, while the N95 face mask was priced at RM6 per unit. - Bernama