Higher starting salary for graduates by middle of the year - Mustapa 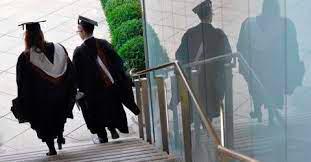 JEMPOL: The starting salary for graduates entering the job market is expected to be higher by the next three or four months with the country’s economy seen recovering, said Minister in the Prime Minister’s Department (Economy) Datuk Seri Mustapa Mohamed.

He said the government was aware that the salary received by new graduates last year was low and attributed the situation to the Covid-19 pandemic, which adversely affected the country’s economic growth, as well as globally.

“Last year, we experienced the worst economic recession in history, so job opportunities were low and, of course, the graduates were willing to receive lower salaries.

“We want Malaysians to enjoy higher wage and salary. It is a problem when the starting salary of graduates has not increased for 10 to 20 years,“ he told reporters after visiting the young ginger planting project at Felda Raja Muda Alias ​​1 here, today.

He said it had been the government’s aspiration to create more quality job opportunities so that the new-employed graduates could enjoy higher salary.

Two days ago, a local portal reported that Malaysia’s Chief Statistician, Dr Mohd Uzir Mahidin said the majority of graduates entering the job market last year received a monthly salary of between RM1,001 to RM1,500 compared to the average of RM2,001 to RM2,500 recorded in 2019.

Meanwhile, Mustapa said RM10 million had been allocated for the young ginger farming project in the Felda Raja Alias ​​region, from the RM100 million allocated by the government to the Federal Land Development Authority (Felda) through the Settlers Development Programme (PPP) this year.

The project, carried out with the cooperation of Agrobank, aims to increase the income of settlers and reduce the country’s dependence on imports of young ginger, including from China.

“We import young ginger worth RM200 million a year from foreign countries ... so, in line with the government’s aim to reduce import and increase food security, we encourage farmers to plant young ginger because of its market potential,“ he said.

He said a total of 132 projects have so far been approved by Felda through PPP with 63 projects undertaken by individuals, while another 69 by cooperatives. -Bernama