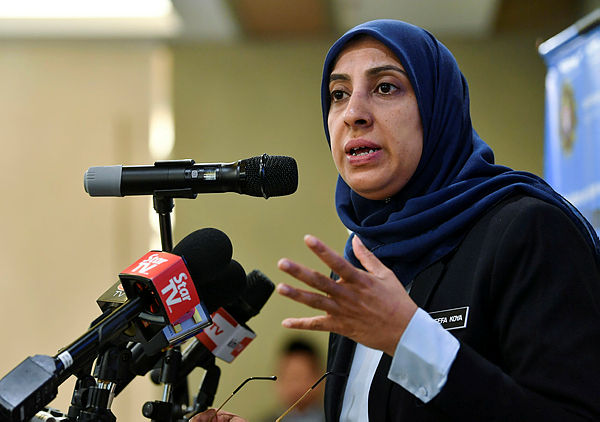 MACC chief commissioner Latheefa Beebi Koya speaking at a question and answer session at the ‘Exclusive On Stage With The Chief Commissioner’ programme in Putrajaya today.

PUTRAJAYA: The Malaysian Anti-Corruption Commission (MACC) is actively gathering feedback from the corporate sector in relation to the government’s move compelling companies to set up their own Integrity and Governance Unit (IGU).

MACC chief commissioner Latheefa Beebi Koya said the feedback is important for the government to draw up a guideline before the order on formation of IGU was enforced in conjunction with the implementation of corporate liability laws in two years’ time.

She said each company has its own regulations and for this reason the proposed guideline should be clear to facilitate implementation.

“Companies need to set up adequate measures, so guideline into that has to be clear. Now we are in the middle of getting feedback for tabling for the consideration of policy makers.

“In this matter, the minister in charge of laws will make a decision and will bring up the guideline soon,“ she told a press conference after meeting representatives of 32 government-linked companies (GLCs) and private companies in an exclusive programme with the chief commissioner here today.

She said apart from gathering feedback, today’s session was also aimed at reducing the fears of the corporate sector regarding the instruction to form IGU and the implementation of corporate liability laws which compels companies to coordinate anti-corruption procedures in line with the enforcement of Section 17(A) of the MACC Act 2009 (Amendment 2018).

Latheefa said the setting up of IGU is to help companies ensure that every step taken would be in accordance with the set procedure, and not to take over the role of any department in the organisation.

Prime Minister Tun Dr Mahathir Mohamad had been reported as saying that GLCs are given two years from October last year to set up IGU, which among others is aimed at strengthening corporate integrity and governance in line with the desire to make Malaysia a corruption-free nation.

Dr Mahathir said a guideline on “Corporate Liabilities and Adequate Procedures” needed to be issued to help companies make a success of the initiative.

Meanwhile, Latheefa said the MACC commissioner’s office received an average of 30 to 40 complaints every day but only 30% were related to corruption.

“Only 30% were on corruption and the rest were about dissatisfaction with local authorities, sexual harassment, police cases and unsuccessful court cases,” she said.

Quoting a World Bank Group study in 2015 which said 51.4% of manufacturing firms in Malaysia had given gifts to win projects, she said this was one reason why the government introduced the National Anti-Corruption Plan (NACP) 2019-2023.

Latheefa said she did not have statistics for other types of industries but it showed the situation was serious enough to warrant specific initiatives to tackle the corruption menace.

“The MACC is the implementing authority for the majority of the 115 initiatives in the plan, and we are confident that with the enforcement of Section 17A, this plan will be easier to be implemented,” she added. — Bernama