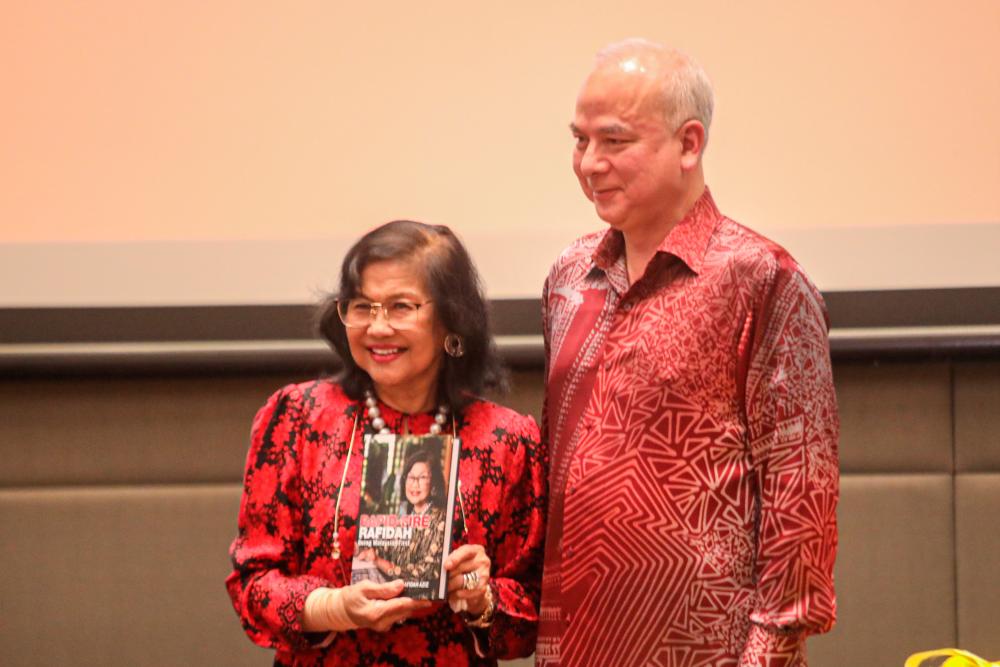 Sultan Nazrin and Rafidah at the book launch. – AMIRUL SYAFIQ/THESUN

At the launch of her book titled Rapid-Fire Rafidah, Sultan Nazrin commended Rafidah for her “towering personality” and being one of the main individuals to move Malaysia towards industrialisation.

Sultan Nazrin added that during her tenure as International Trade and Industry minister, she attracted massive investments into Malaysia.

“As our trade representative, she was called ‘Iron Lady’, and was steadfast and uncompromising in promoting our national interests,” said Sultan Nazrin in his royal address.

He also said Rafidah, who taught economics at the University of Malaya, was a highly skilled technocrat, who steered Malaysia in the right direction during the 1987 financial crisis, adding that it was her measures that helped ensure Malaysia’s recovery was swift compared with neighbouring countries.

“Rafidah championed the role of developing countries at international forums and also established Martrade (the Malaysia External Trade Development Corporation), which helped raise the profile of Malaysian manufacturers on the global stage.”

Sultan Nazrin also lauded her as a trailblazer, who made outstanding contributions to Malaysia’s growth.

When she served as MP for Kuala Kangsar, she worked tirelessly for decades to transform the town and provide the necessary infrastructure for the residents.

Referring to her early education at the Kampung Baru Malay Girls School and later at Convent Bukit Nanas, and her Form Six education at Victoria Institution, Sultan Nazrin said this “multicultural” education forged Rafidah’s identity, that commanded respect on the world stage.

“Rafidah is a representative of all Malaysians and remains a powerful role model,” the Sultan said, adding that she remains concerned about women’s welfare, especially rural women and the constraints they face.

In her book, Rafidah recounts her early years in her grandparents’ home in Selama, Perak, and the idyllic time she spent there before moving with her parents to live in Kampung Baru, Kuala Lumpur.

She also narrates how she passed her exams to enter the Convent of the Holy Infant Jesus in Bukit Nanas, and how elated her mother had been at her success.

Rafidah, 79, said she enjoyed her time as a student in Convent Bukit Nanas, before moving to Victoria Institution to complete her Form Six, after having passed the entrance examination. Bersatu will be in touch with MACC over frozen accounts, says Muhyiddin Man-made shed housing van found in middle of the road 2.Man-made shed housing van found in middle of the road

5.Anwar: Govt does not interfere in MACC probe against Bersatu