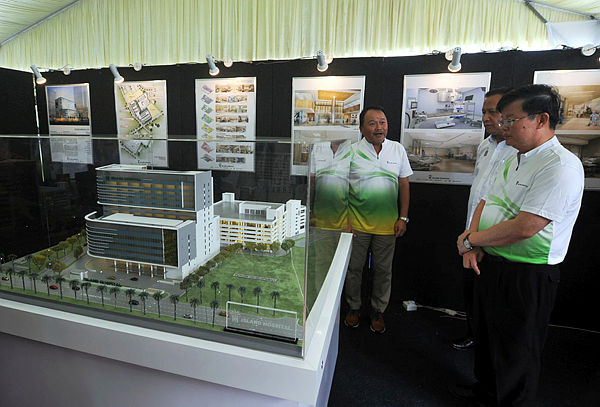 GEORGE TOWN: The Island Medical City (IMC) at Peel Avenue and Pierce Road, here will be the first of its kind medical hub in Malaysia, complete with state-of-the-art medical equipment and the largest and most advanced tertiary care facility in Penang.

Chief Minister Chow Kon Yeow said the development of IMC would be an expansion to the current medical facility in Island Hospital which would encompass in total a 600-bed medical complex, medical suites as well as a medical tourist hotel as part of its facilities.

“Being one of the largest medical tourist hubs in Southeast Asia, this project will provide Penangites with over 2,000 job opportunities. I believe that our up and coming young medical professionals are excited over the new opportunities at the IMC.

“Not only that, medical specialists, especially those practising overseas, will now have a reason to come home to set up their long-term practice in Penang. This is a good opportunity to attract back our talents who have since left the country,“ he said in his speech at the Island Hospital expansion ground-breaking, here today.

The total project, with a gross development value close to RM2 billion, will take five years to complete, with phase one expected to be completed by the beginning of 2021.

Chow said the economic value of the project is expected to exceed RM7 billion with benefits spilling over to the other industries as well, creating sustainable progress for Penang.

Meanwhile, at a press conference, when asked on the four buildings on the land that were categorised as Category II heritage buildings in the state heritage building list, Chow said the buildings were demolished with the approval of the Penang City Council (MBPP).