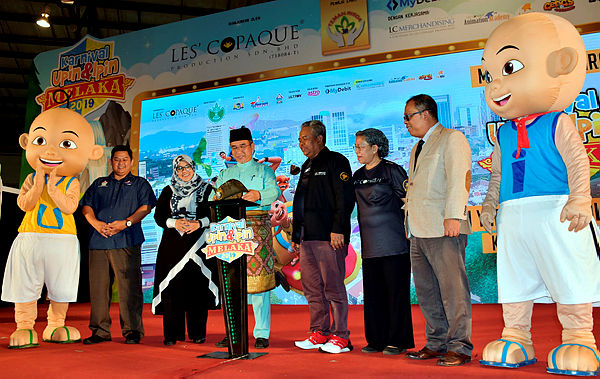 MALACCA: The Malacca state government plans to make the animated cartoon ‘Upin & Ipin’ a tourism product in efforts to attract more visitors to the state.

He said the state government would provide assistance and support specifically in the area of promotion to implement the initiative through the Tourism Promotion Division, state government agencies and local authorities.

“Upin & Ipin is not only a local brand but internationally renowned while Malacca is a popular tourist destination among locals and foreign tourists, receiving a large number of visitors each year.

“We are confident that Les’ Copaque Production Sdn Bhd will be able to evaluate the proposal based on the presence of tourists in Melaka and we can always work together to promote Upin & Ipin as a tourist attraction,“ he told reporters after opening the 2019 Upin & Ipin Carnival at the Melaka International Trade Centre, here, today.

The three-day carnival from today is targeting 100,000 visitors and one of its main attractions is Inderaloka Hall which has been turned into a fantasy government inspired by the movie ‘Upin & Ipin: Keris Siamang Tunggal’.

Burhanuddin, meanwhile, said construction of the Upin & Ipin theme park which would involve a huge budget was still under consideration in terms of its location as he had received similar offers from several state governments.

“It needs to be carefully considered as the investment is not small, around RM700 million, and it involves building a closed theme park,“ he said.

He also noted that two new Upin & Ipin animation flicks are expected to be produced in the next two to three years.

Visitor to the carnival today, Atiyya Ismam, 40, from Klang said she travelled to Melaka along with her four children, aged between three months and 10 years, to meet with the Upin & Ipin mascots up close.

“This carnival is suitable not only for children but also adults as all activities can be participated by all,“ said the civil servant. — Bernama