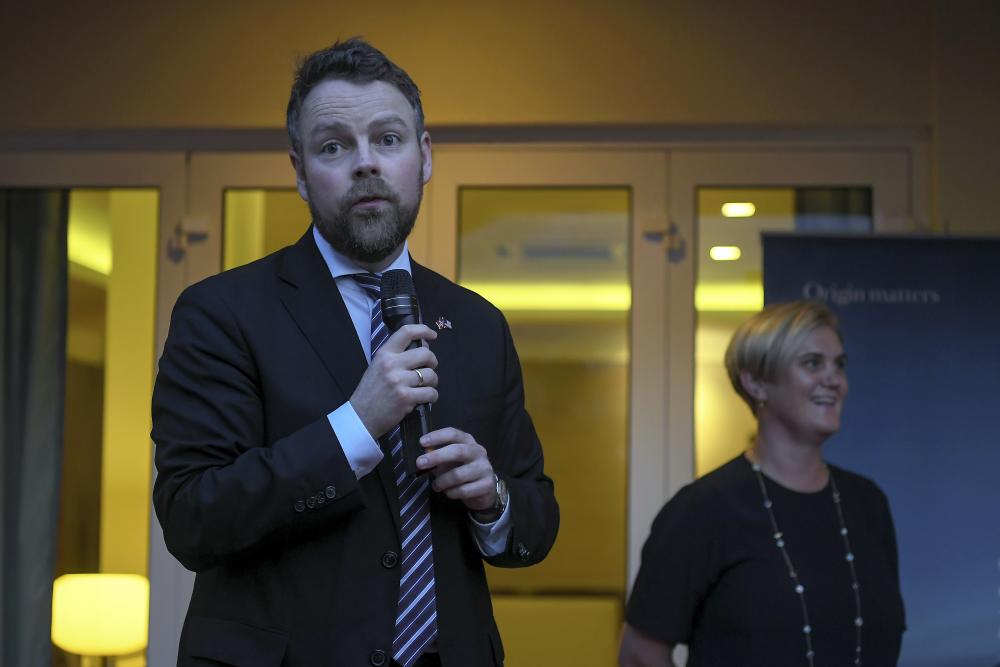 Norwegian Minister of Trade and Industry Torbjorn Roe Isaksen (L) delivering his speech during his visit to the Norwegian Ambassador Residence at Jalan U-Thant, on Feb 26, 2019. — Bernama

KUALA LUMPUR: Bilateral trade between Malaysia and Norway has remained healthy over the past decade in growing by 72%.

In stating this, Norway’s Trade and Industry Minister Torbjorn Roe Isaksen who is on a two-day visit to Malaysia from Feb 25, hopes for a similar increase over the next decade.

His visit is intended to explore new areas of cooperation with Malaysia and further strengthen bilateral relations, with discussions over palm oil, being part of the trade agenda.

“Trade is no longer about making something in one country and selling it to another alongside negotiations on tariffs. It is about deeper business to business cooperation and partnerships,” he told Bernama.

As of 2018, Norway’s total trade with Malaysia amounted to US$614 million.Exports to Malaysia totalled US$196 million, while imports were at US$442 million.

Among Norway’s most important exports were chemical products(29%), seafood (15%), industrial machines, equipment (10%), while imports were in the form of iron and steel (32 per cent), electrical machines and equipment (14%) and telecommunication, phones (10%).

Isaksen said Norway’s Pension Fund Global had invested about US$3.8 billion in almost 200 companies in Malaysia in sovereign bonds as well as stocks.

He said the fund had a broad investment mandate with no political intervention as to which country to invest in, while following ethical and economic guidelines and undertaking its own assessments based on risks.

Meanwhile, on the issue of the ban on palm oil by Norway, Isaksen reiterated that it was just rumours, while acknowledging there was a tendency among certain organisations and parliamentarians to perceive the commodity as not being sustainably produced.

“It is important to communicate well on this perspective. I have read some summaries from press reports (on the ban). The Norwegian parliament had a proposal asking that the government ensure palm oil, which has been used for biofuel, is sustainably produced.

“So, there has never been a proposal to ban palm oil related to biofuel. We are working at the proposal now, to see how and what this will mean in practice. The proposal does not name any country or companies,” he added.

He said from his visit to Sime Darby’s West Estate on Carey Island and a thorough briefing there, he saw how the Malaysian government, together with the business community, is thinking about systematic standard evaluation certifications on sustainability issues.

On what his recommendation to Norway’s Parliament would be, Isaksen said there would be several ministries looking at this issue.

“We have not finished our work yet. What is important for us is to look at what parliament has asked us to consider in relation to “sustainable palm oil” as the key phrase.

Secondly, it is to ensure the Norwegian policy is in accordance with International trade agreements,” he added.

On concerns over a ban on palm oil coming into effect on January 1, 2020, he said, there would be none, as nobody had proposed it.