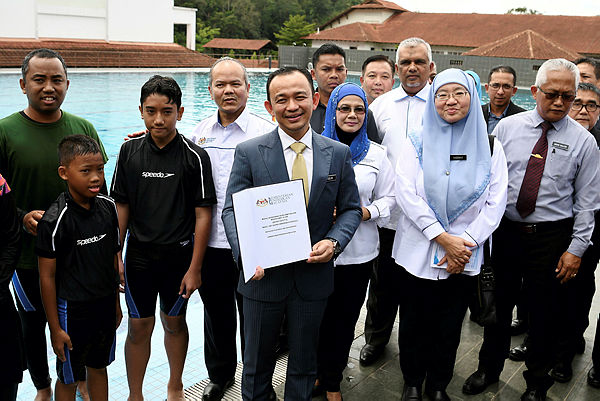 KUALA LUMPUR: The private sector, especially hotels with swimming pools, are urged to offer their facilities to schools for student swimming activities.

Education Minister Dr Maszlee Malik said discussions on the matter would be held with the hotels so they could work with the schools and treat the move as a Corporate Social Responsibility (CSR).

“We also hope that the hotels will be proactive in taking its own initiative after this announcement,“ he told a news conference after launching the 2018 Life Saving Skills programme and the Water Rescue and Safety Awareness Module, here today.

Maszlee reported that the learning to swim co-curriculum activities would be introduced to school children in the ministry’s efforts to prepare them with that skill, thus addressing drowning incidents.

“Initial plan was to bring them to sports centres and public pools. We are calling the hotels to enable them to perform their CSR,“ he said, adding that not all schools were equipped or were near swimming pools.

Asked whether the learning to swim activities would be a compulsory addition to co-curriculums, he said the government had plans to make it a mandatory syllabus from pre-school to secondary school, but it would take a long time, as there are about 10,000 schools nationwide.

Earlier in his speech, Maszlee said, for now, swimming activities would be conducted through clubs and associations.

Meanwhile, he said the module which was launched today was the first and most significant event besides being timely to show the ministry’s commitment in spreading awareness on the importance of water safety. — Bernama