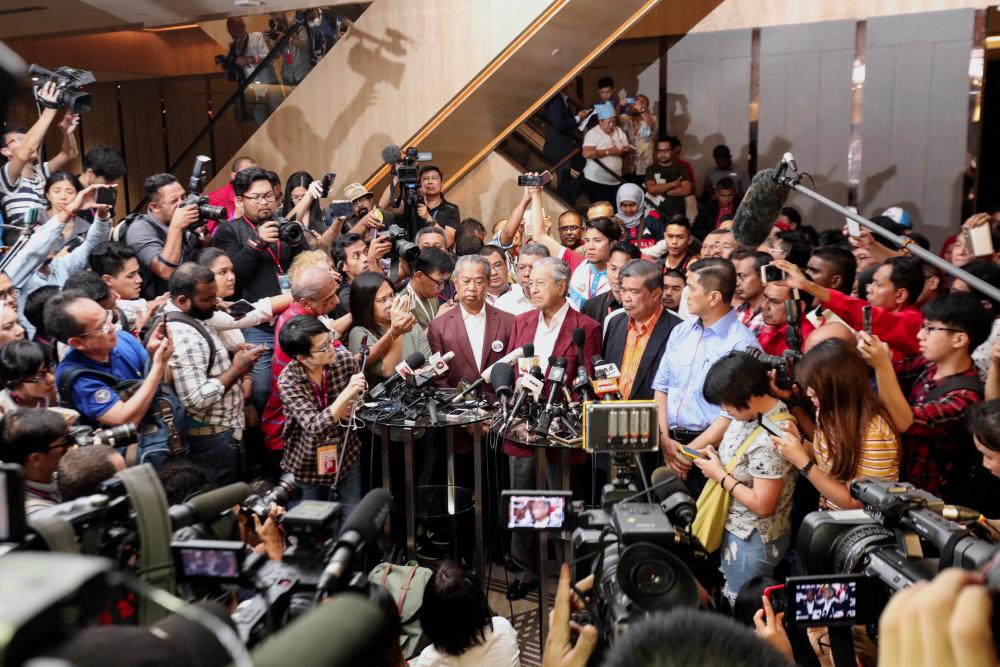 PH chairman Tun Dr Mahathir Mohamad, 93, and other Pakatan Harapan leaders at a news conference after the 14th General Election in Sheraton Hotel, Petaling Jaya on May 9, 2019. — Sunpix by Zulfadhli Zaki

KUALA LUMPUR: May 9, 2018 will forever be etched in the memories of Malaysians.

It was the day voters were all doing the same thing: queuing up to cast their ballots and wait for the 14th general election (GE14) results with bated breath.

Voters and Malaysians at large, from different backgrounds, education, religion, culture, lifestyle, community groups, career endured a sleepless night glued to their television sets or smartphones to follow the results of the election, even waiting until 5am the next day and another 20 hours for the new government to be sworn in.

Each of one them had a story or tip-off to tell and share, with some eager or tense to get the results which later gave them a moment of history when a new government under the Pakatan Harapan (PH) coalition was elected, after 60 years Barisan Nasional-rule.

GE14, dubbed the “father of all elections” saw the PH coalition, comprising four opposition parties - DAP, PKR, Amanah and Bersatu - win 113 out of the 222 parliamentary seats and thus entitled by law to form a new government with a simple majority.

The coalition then chose Dr Mahathir Mohamad, 93, to be the prime minister. Mahathir who was Malaysia’s fourth prime minister from 1981-2003 when he helmed Barisan Nasional (BN) then, was later sworn in as Malaysia’s seventh Prime Minister (on May 10. 2018), after leaving the job for 15 years ago to become the world’s oldest elected prime minister.

This so-called political tsunami or people’s power created an unexpected victory hence generating a mood of euphoria in Malaysia where voters were eager for change and awaited a grand plan for Malaysia Baru (the New Malaysia) from the newly-elected government under the leadership of Mahathir.

Malaysians at large were eager to blend in with Mahathir’s quest and crusade to put right the many wrongs that he said were committed by the previous government in his GE campaign, thus bringing in the Malaysia Baru grand plan.

During his first press conference on the historic night, Mahathir was asked whether there would be any action taken against BN’s leader, Datuk Seri Najib Abdul Razak, and replied: “We (Pakatan Harapan) are not seeking revenge. We just want to restore the rule of law.

Among notable messages that night was that the PH led-government would stabilise petrol prices, abolish the Goods and Services Tax (GST), reduce the cost of living, review mega projects awarded to foreign countries, all which were later fulfilled.

Not forgetting, the successful resolution of the 1MDB scandal using legal channels, the restructuring and recovery plans of government-linked companies such as Lembaga Tabung Haji (TH) and Federal Land Development Authority (Felda) and to combat corruption on a bigger scale and into high gear with the introduction of the National Centre for Governance, Integrity and Anti-Corruption (GIACC) and National Anti-Corruption Plan, taking the lead.

“It is the main agenda so far and the Prime Minister himself is constantly issuing reminders specifically to civil servants to make corruption their number one enemy. The assurance (by PH) of a clean government must be supported by everyone,“ he told Bernama.

Turning 94 this year, Mahathir seems to ignore his golden age and is fighting tooth and nail in changing and developing Malaysia’s future . He has allowed mammoth infrastructure projects like the East Coast Rail Link (ECRL) to continue but at a much reduced cost, reduced the construction costs of the LRT3 and Mass Rapid Transit 2 (MRT 2) projects, which are scheduled for completion by February 2024 (LRT3) and July 2021 (MRT2).

On the Kuala Lumpur-Singapore High-Speed Rail (HSR) project, Malaysia is now looking into ways to further cut the cost and will be discussing this further with Singapore before the end of the suspension period on May 31, 2020.

Mahathir’s stellar performance in PH’s first year in administering the country was aided by his deputy, Datuk Seri Dr Wan Azizah Wan Ismail, and his cabinet members despite most of his ministers being new and inexperienced when they took office.

In a special interview in conjunction with the PH’s first anniversary as the ruling party, he explained that as a prime minister, he tries to teach and guide them, and is confident that they will be as good as the experienced ones, given time.

On this matter, Che Hamdan commented that having a female deputy prime minister and more women’s presence in this new government, was an honour in a way to show their credibility and fulfil their responsibility handsomely.

As the country celebrates the first anniversary of the PH victory in the GE14, forming and running the new federal government, it is natural to ask - how well has the government done in terms of the administrative perspective and delivering on its election promises.

Mahathir did confess that the coalition made too many election promises because it didn’t expect to win the 14th general election.

“Actually, we did not expect to win, and we made a thick manifesto with all kinds of promises ... We need to make sacrifices to fulfil our promises. If we can’t fulfil them, we will need a good reason that is acceptable to the people,“ he said.

Former finance minister Tun Daim Zainuddin opined that the PH government needs another six months to repair the damage left by the previous government and bring the country back on track after taking over the administration in May last year.

The Council of Eminent Persons chairman said during this period, PH would have to face the people and give an accurate explanation when needed, especially on economic-related matters, so that the people would understand the current situation.

Geostrategist and former Universiti Teknologi Malaysia (UTM) lecturer, Azmi Hassan said the PH government is trying very hard to fulfil its obligations as the government of the day but due to several constraints, especially inexperienced ministers, improvement is very slow indeed.

“There’s no learning curve luxury for the ministers since they need to perform right from the day one and not to wait till the second year. For the last one year, PH has been harping on the issue of BN liabilities such as debt level and 1MDB issues.

“So come the second year of its administration, blame on other parties can’t be used anymore to create reasons on why the PH can’t function as expected. So, in my opinion, the second year will be challenging for the PH government since the people don’t want to hear excuses but want results, so that teething problems such as high cost of living will be dealt by the government.

“The people seem to be very forgiving in nature for the past year but make no mistake, come May 9 and onwards they maybe will be in an unforgiving mood and demand results instead,“ he said when contacted.

Malaysians must take note that real changes or reforms equivalent to the “grand plan” for Malaysia Baru, can only take place in the coming years.

Political analyst and professor at Department of Government and Civilization Studies, Faculty of Human Ecology, Universiti Putra Malaysia (UPM), Prof Dr Zaid Ahmad said one year is too short to evaluate PH’s performance since the administration needs to do a lot of housekeeping work.

“Now we are entering a new phase in the maturity of the democratic process in Malaysia. It is this maturity that will make democracy flourish. The winners are the rakyat (people),“ he said.

The PH government will mark one year in power tomorrow (Thursday) and still has some way to go to fulfil its election promises in five years.

Tomorrow, around 3pm, Mahathir is scheduled to give a national message in conjunction with PH’s one year in power in Putrajaya.

What is in store for the rakyat in his message?

The following are among the Pakatan Harapan government’s achievements in its first year of administering the country.

» The East Coast Rail Link (ECRL) project will resume at a reduced cost of RM44 billion from RM65.5 billion

» Unlimited travel pass for commuters (My100 and My50)

» Smoking ban in all eateries

» White Paper on sustainability of Felda