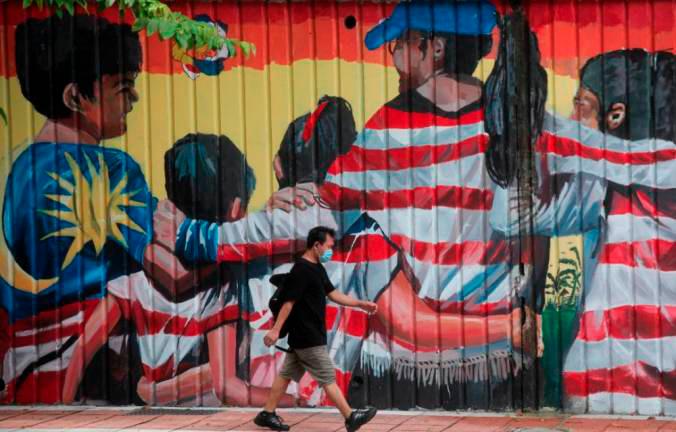 KUALA LUMPUR: Kuala Lumpur will be transformed into a street art capital and adorned with giant mural paintings of various concepts through the beautification of back lanes and in between buildings in the city.

The project, to be carried out in stages, is inspired by the success of cities such as Melbourne, in Australia, which is famous for the creativity of its street artists, whose work have become a world attraction.

Towards this end, Kuala Lumpur City Hall (DBKL) is now looking into the design and the technical aspects of the matter.

Kuala Lumpur Mayor Datuk Mahadi Che Ngah said following the success of pilot projects, such as the transformation of the previously dark, smelly and dirty lanes at Changkat Bukit Bintang in March 2018, DBKL will expand the project to other lanes.

He said besides the lanes in the Bukit Bintang area, the project would also be carried out at Lorong Sultan and Lorong Petaling, which are near Pasar Karat and Petaling Street or ‘Chinatown’, to make the area more attractive.

“Pasar Karat is normally frequented by antique lovers, while Petaling Street is a famous place among tourists, and is also a ‘trademark’ of Kuala Lumpur.

“However, many people are afraid to use the lanes, regarding them as black area and unsafe...so this project will give a new image, to make the lanes cleaner, safe and cheerful,“ he told Bernama.

Mahadi said for Lorong Sultan, the proposed mural will feature the history of the area, with rustic signage will put up and the infrastructure there, including the drainage system, will be upgraded.

“It will also involve recolouring of the pavement and putting up additional street lights,” he added.

For the mural painting at Lorong Petaling, he said it will feature aesthetic and ‘Instagrammable’ (something that is visually appealing and suitable for posting on Instagram social media applications) pictures of nature to make the area cheerful and beautiful.

“This will help to boost the economic sector, especially business opportunities in the area, with visitors going there not only to shop, but also for various other leisure activities such as photography,” he added.

Mahadi said the paintings at the lanes will each each have a different concept, theme and identity, depending the background and history of the area concerned, as well as based on suggestions by the local community.

“For example, at Jalan Alor, the people there want bright and cheerful colours, so images like butterflies and rainbows are chosen,“ he said.

Elaborating on the pilot project at the Bukit Bintang area, Mahadi said that until now, six back and side lanes have been given a facelift.

Meanwhile, he said, two other projects , which involve the setting up of a pocket garden at the intersection of Jalan Rembia (in front of Hotel Malenge) and a food festival at Jalan Rembia and Jalan Alor, are still in the planning stage.

“These projects will be implemented because of the significant impact it will bring to the local community, to make them love the place and create a sense of belonging, for them to together take care of the place.

“From just being inside buildings, they now feel good and comfortable going out to do activities outdoor, meet and communicate with others,” he added.

The transformation, he said, would also increase the rental value of shop lots in the area by up to 40 percent, as well as create employment and business opportunities.

Besides the back and side lanes, he said DBKL is also looking into having mural paintings on suitable buildings, such as ‘feeder pillar’ and along walkways, like the one at the River of Life (RoL) Bukit Nanas area.

Mahadi said the Kuala Lumpur Wholesale Market had also been given “life” and beautified with mural paintings.

“We also see the potential of the Kuala Lumpur Wholesale Market to become a tourist attraction, like the Queen Victoria Market, Melbourne, Australia,” he added.-Bernama