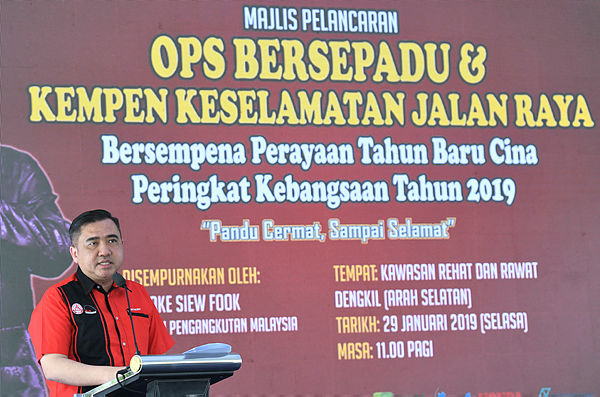 He said they were aimed at reducing the rate of road accidents and did not want motorists who were issued summonses to have the attitude of waiting for discount offers before paying up.

“We do not want motorists to take the summonses lightly,” he told reporters after launching the ‘Ops Bersepadu dan Kempen Keselamatan Jalan Raya 2019’ (Road Safety Campaign) in conjunction with the Chinese New Year festival at the Dengkil rest area heading south, here today.

Regardless of whether it would cause dissatisfaction among road users, Loke said: “If you want to be angry with the Transport Minister, then be angry. My job is to reduce the number of road accidents. That is my KPI (key performance indicator).”

Loke said he planned to talk to the Home Ministry and local authorities not to reduce their summonses too.

Among the traffic offences that are often committed by motorists were beating traffic lights, overtaking at double lanes, using cellphones while driving, cutting queues, not wearing seatbelts, driving continuously in the right lane and driving in the emergency lane.

On the Road Safety Campaign which runs from today until Feb 12, Loke said it involved 10,000 enforcement officers and staff including the Royal Malaysia Police, the RTD and the Road Safety Department. The best Malaysian stories and entertainment Man rams into his own uncle, aunt in freak accident

5.Many injured as passengers jump out of Spanish train surrounded by wildfire