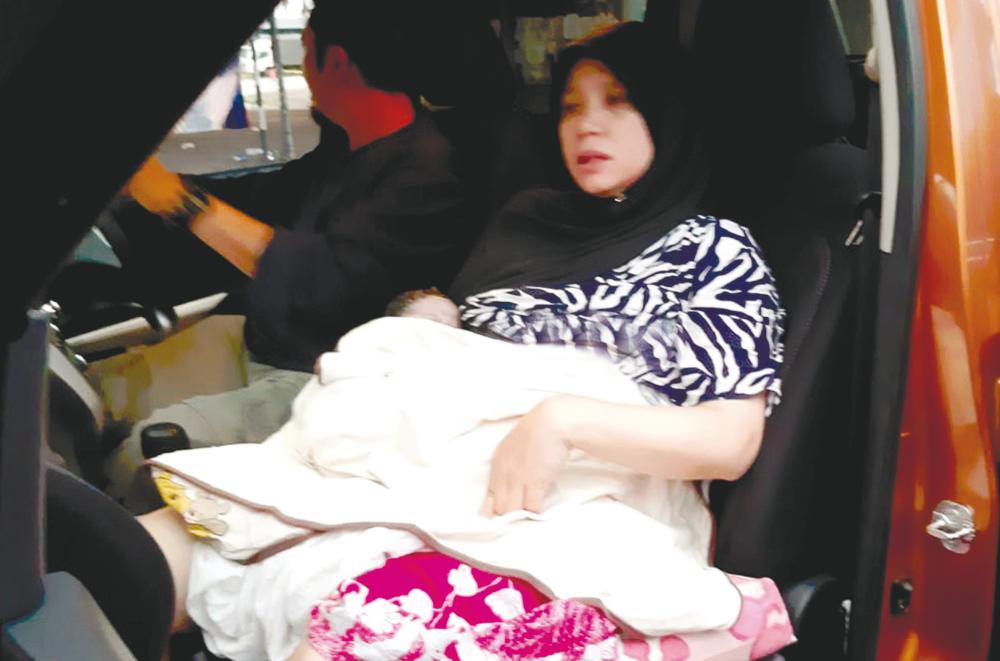 The couple and their newborn left for the hospital after an ambulance crew gave them the all-clear. – Pic from Facebook

KUALA LUMPUR: In a true display of the Malaysian Family spirit, devotees celebrating Thaipusam yesterday helped a Malay woman deliver her baby after she went into labour in a vehicle parked opposite the Sri Subramaniam Temple in Batu Caves.

Upon hearing the woman’s cries for help, both men and women passersby who were walking towards the temple turned around and rushed to her aid.

Seeing she was in open view of the public, the devotees took their sarees and veshthis and held it up around the vehicle.

Several women then assisted her in safely delivering a baby girl, witnessed by her stunned husband who was in the driver’s seat. A female devotee then helped cut the umbilical cord with a knife after the infant was delivered.

The couple’s names were unavailable but they are believed to be in their 30s.

The woman is believed to have experienced contractions earlier and was being driven to a hospital by her husband when she went into labour at about 7.20am.

Her husband then pulled over under a flyover in front of the temple.

Journalist L.K. Savantharaja, 45, of Tamil newspaper Makkal Osai, who was covering news of the Thaipusam celebrations, said he was startled when he heard screams for help coming from a vehicle, adding that he and several devotees rushed over.

“It happened so fast. The devotees were really fast to respond. They quickly held up their vesthis and sarees to ensure the pregnant mother was comfortable before she delivered her baby. Once again, Malaysians came together to offer help regardless of race or religion.

“It was a touching moment that made me so happy and brought tears to my eyes,” said Savantharaja, who is better known as L.K. Raj.

He added that about two minutes after the baby was delivered, an ambulance arrived and medical responders checked on both the mother and child.

Savantharaja said after paramedics gave the all-clear, the cauple and their newborn resumed their journey to the hospital, accompanied by the ambulance.

Videos and photographs of the event taken by Savantharaja and other bystanders have been widely viewed on social media, with netizens commending the devotees for their quick action and kindness.

In one video taken by Savantharaja, the couple thanked everyone who helped them and wished them “Happy Thaipusam”.