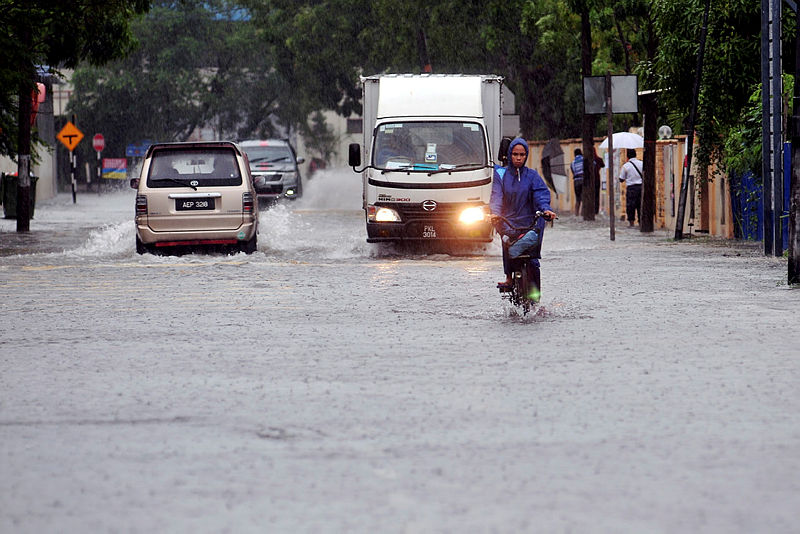 GEORGE TOWN: When the sky darkens and thunder starts rumbling in a distance, that would be a cue for most people to get their sun-dried laundry inside.

In Penang, however, the first sign of a drizzle may bring many to a mad dash to move their vehicle and belongings to higher ground.

Flash floods have become so common in Penang that a few hours of heavy rain would almost certainly cause a flood, particularly in the north-eastern region of the state.

What is the cause?

The Nov 5 deluge paralysed Penang as it saw nearly the entire state inundated, even in areas that had never flooded before. Strong winds and torrential rain struck down tens of trees and resulted in the loss of seven lives.

The severity of the situation prompted the state government to ask for the help of the federal government. The latter approved a budget of RM150 million for the third phase of the Sungai Pinang Basin Flood Mitigation Project.

Some have speculated that the deluge was caused by an inadequate flood mitigation system while others blame the clearing of hillslopes for the numerous development projects in the state.

There were calls for the state government to cancel the risky development projects on the hillslopes to prevent further risk of flood and landslide.

However, the Penang Chief Minister at the time, Lim Guan Eng, dismissed the idea that the flood resulted from the development and called it a natural disaster instead.

And this was due to the demand for it, he said.

“It is difficult to stop the development in Penang because people need places to live, industries need offices, universities require space, more schools need to be built and roads need to be upgraded.

“This is a conflict of priority between development and structural needs. We cannot choose one or the other. They must be balanced,“ he told Bernama.

Penang was a highly developed state, he said. However, the number of available catchments were insufficient due to the lack of land.

He said what has been happening was that land meant for paddy planting, which also served as reservoirs, were turned into housing areas as well as for other developmental projects.

“That is the cause of the problem (flooding). Previously, rain would go into the paddy fields. Today, those paddy fields are gone and in its place are housing projects, and there are no other rainwater reservoirs to replace the ones taken,“ he explained.

Nor Azazi commended the state government’s effort to expedite the crucial third phase of the Sungai Pinang Basin (SPB) Flood Mitigation Project, which is scheduled to take place in April next year. The project is expected to be completed by 2023.

The SPB Flood Mitigation Project started in 1996 under the 7th Malaysia Plan and ran through 2004 under the 8th Malaysia Plan, involving a cost of RM8.3 million to protect settlement areas near the mouth of Sungai Pinang from flood.

The third phase of the project is expected to benefit some 150,000 people in a flood-protected area covering 300ha.

Nor Azazi said the flood mitigation project was part of the state government’s effort at a long-term remedy to flooding in the state.

“This is something that should have been done long ago but due budget constraints, the government can only afford to execute the project in stages. As a result, some people might view the project as ineffective because floods keep occurring. The reason that is so is because the project has not fully been completed due to its massive costs,“ he explained.

He said with the change in the federal government, it was hoped that budget allocations for flood mitigation projects would be approved faster.

Everyone should chip in

Nor Azazi said that the issue of flooding needed to be looked at holistically. Addressing the problem should be a collective effort, not a burden to be placed only on the federal or state government.

He proposed that the state government introduce to every household a rainwater harvesting system in the bid to collectively reduce incidences of flooding.

“A house can collect, say, about a cubic metre of rainwater through a method of their choice. If we introduce this as a policy, it can act as a preventive measure.

“If the government made it compulsory for every home to buy a tank to harvest rainwater, imagine how much water we would save. The harvested rainwater can be used to water the plants or wash the car,“ he said.

In addition to that, he said, the public should also actively take care of the cleanliness of rivers and drains to prevent it from collecting stagnant water. — Bernama 1.Less than 10% of companies failed to pay SST last year