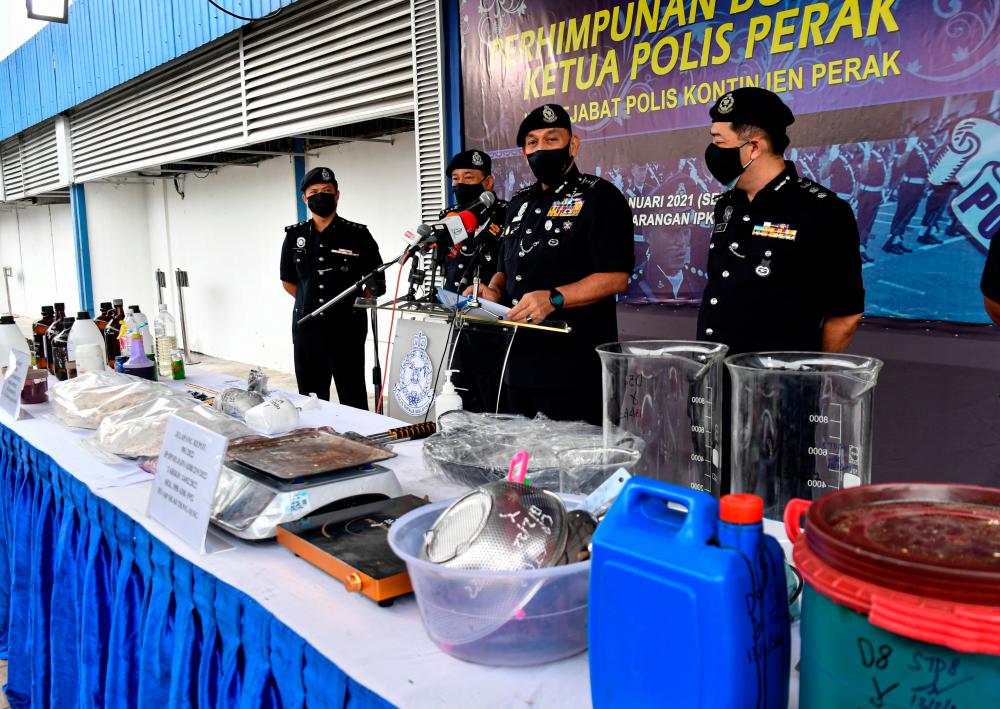 IPOH: Police uncovered a syndicate operating a drug processing laboratory and distribution centre in a rented house in Meru here with the arrest of six suspects in Perak and Negeri Sembilan in five raids on Sunday and Monday.

The suspects, aged between 21 and 39, were nabbed during the raids mounted by the Narcotics Criminal Investigation Department (NCID) team from Bukit Aman and Perak Police Contingent.

Perak police chief Datuk Mior Faridalathrash Wahid said drugs believed to be heroin, weighing an estimated 9.4 kilogrammes (kg) and 1.1 kg of syabu worth an estimated RM167,268 were found in the double-storey terrace house.

“Chemicals and paraphernalia for drug processing were also found and seized.

“The total amount of drugs confiscated can be used by 52,800 drug addicts,” he told a press conference at the Perak Police Contingent headquarters here today.

Mior Faridalathrash said the initial screening of the six suspects found that two of them tested positive for drugs, namely ganja and opiate, while checks found that all of them had previous criminal records related to criminal cases and drugs.

He said police also confiscated various assets of the syndicate, namely five vehicles and jewellery estimated to be worth RM181,500, bringing the total value of seized drugs and goods to RM348,768.

He added that all suspects are being remanded for six days until Saturday to assist in the investigation. — Bernama