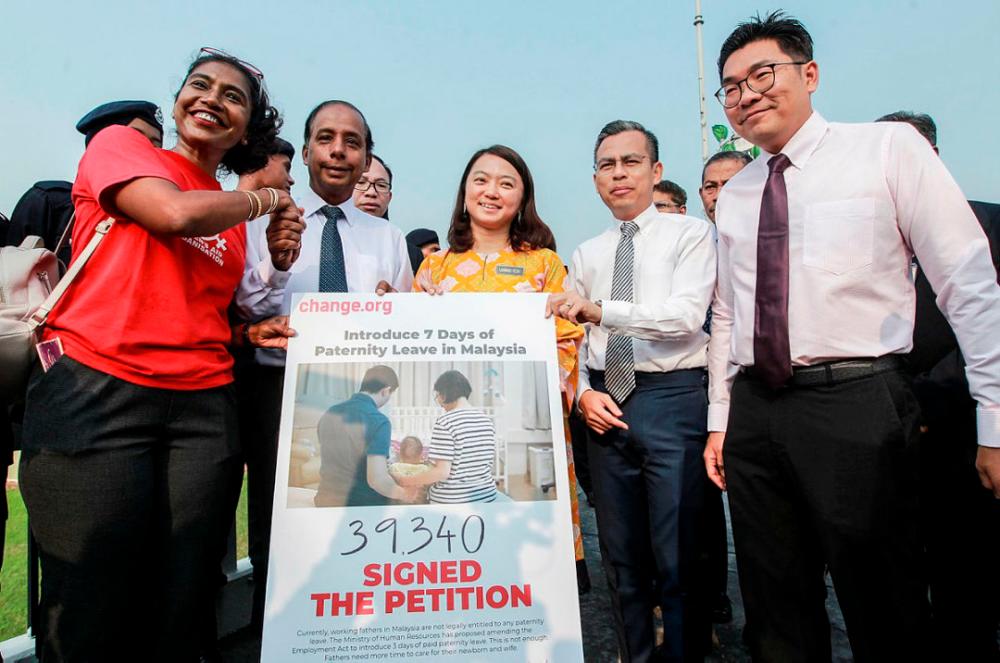 A petition from the Women’s Aid Organisation (WAO) outside the parliament building today.

KUALA LUMPUR: Paternity leave for the private sector will be enforced by this December or next March, Human Resources Minister M. Kulasegaran said today.

“I hope to table the amendments to the law in the parliament before the meeting ends on Dec 5,“ he told reporters after receiving a petition from Women’s Aid Organisation (WAO) outside the parliament building here.

He said if the matter is not raised by the end of this year then it will be done in the next.

The current Parliament sitting ends on Dec 5, and the next meeting is in March.

WAO’s petition with almost 40,000 signatures is seeking seven days of paternity leave in the private sector.

Kulasegaran said the initial proposal to the Cabinet is three days of paternity leave, but he will forward the proposal to raise it to seven days.

“I will forward the views given here to Prime Minister Tun Dr Mahathir Mohamad and get things done,“ he said.

The minister said he agreed with WAO on the importance of having seven days of paternity.

“This will help to create a stronger bond within the family unit,” he said. “It is also shown that the productivity increases if a longer period of time is given. Think of the bigger good, not just dollars and cents.”

Deputy Women, Family and Community Development Minister Hannah Yeoh, who was present, said she supports the proposal for compulsory paternity leave for fathers.

“As a mother, I understand what it is like and how hard it is to even get out of bed in the first few days after delivery,“ she said.

Meanwhile, WOA executive director Sumitra Visvanathan said the initial proposed three-day paternity leave by the government was a positive step but it is inadequate.

Also present at the gathering were the supporters of WAO, including television personality Daphne Iking and former DJ and Youtuber Jinnyboy.