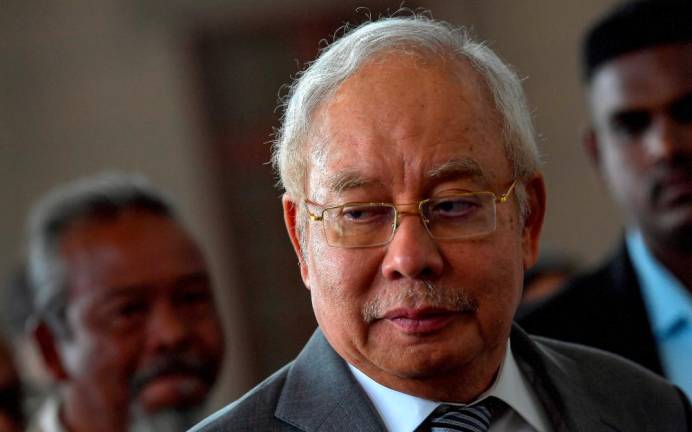 KUALA LUMPUR: The prosecution in Datuk Seri Najib Tun Razak’s 1Malaysia Development Berhad (1MDB) trial would initiate contempt proceedings against the former prime minister over his remarks in relation to the trial.

This was raised by lead prosecutor Datuk Seri Gopal Sri Ram at the start of the trial before Justice Collin Lawrence Sequerah today.

Sri Ram informed the court that the news published by Reuters on March 4 carried remarks from Najib who said that he was expecting a more conducive atmosphere for a fair trial with the fall of the Pakatan Harapan government.

“That is a serious allegation. It seems like Your Honour’s court emanated a bad atmosphere before the government changed. I am advised to take out contempt proceedings against the accused because this is a very serious allegation,” Sri Ram said.

He said the prosecution would be making a formal application over the matter.

Najib’s lead counsel Tan Sri Muhammad Shafee Abdullah countered that the remarks were not meant for the court.

He also said there were no contempt proceedings brought against former Prime Minister Tun Dr Mahathir Mohamad following his remarks to his client (Najib).

“The former prime minister (during Pakatan Harapan government) seemed to declare my client as a ‘penyangak’, a robber, and a thief.

“Perhaps with a change of government, with getting rid of Dr Mahathir, it is more conducive for my client. It (the remark) does not denote Your Honour at all,” said Muhammad Shafee.

Abortion rights around the world

1.Transition to Covid-19 endemic phase can lift Malaysia out of the doldrums

2.Teachers refusing vaccination may be transferred if PdP affected