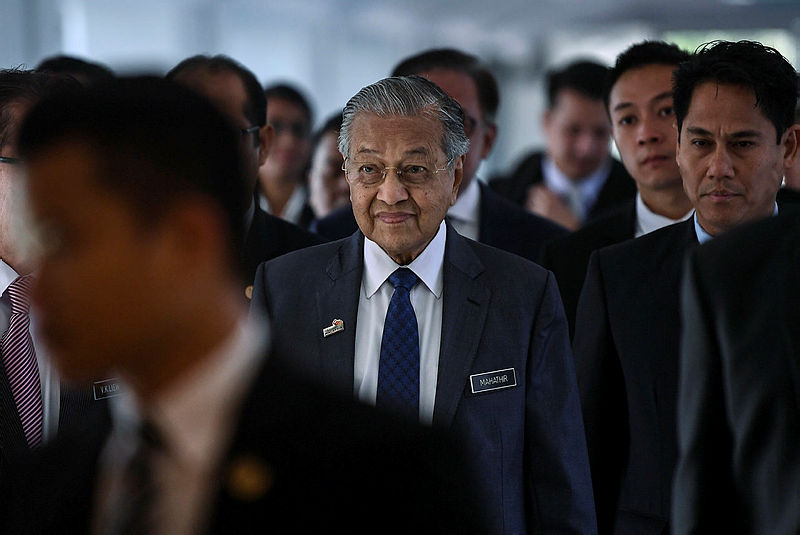 KUALA LUMPUR: Tun Dr Mahathir Mohamad has called for patience from Malaysians as the government attempts to bring to book those who were involved in corruption and abuse of power from the previous administration.

The Prime Minister said while he acknowledged that many among the public were beginning to question the delay, the rule of law still needed to be respected.

“Supposedly, by now we should have seen those who were charged with various offences involving the 1Malaysia Development Berhad (1MDB) and SRC International Sdn Bhd brought to the court.

“But as a government that abides by the rule of law, we respect the court’s decision to postpone the case,” he said in the Dewan Rakyat yesterday, referring to the postponement of former premier Datuk Seri Najib Abdul Razak’s trial which was initially due to start on Feb 12.

“We respect the court even though the rakyat has been asking why those who were clearly guilty of corruption are yet to face trial. And although we (government) have tried our best, we have to respect the law,” he added.

Mahathir was responding to a supplementary question from Datuk Seri Ahmad Maslan (BN-Pontian) on what the government plans to do to address the issue of unfulfilled promises.

“We are doing our best to fulfil all our pledges. But the actions of the previous government, as well as the law, makes our efforts a bit harder,” Mahathir explained.

Najib’s trial at the Kuala Lumpur High Court pertaining to SRC International was postponed just a day before it was supposed to begin after the Court of Appeal three-member panel allowed the stay.

On a question by Datuk Tuan Ibrahim Tuan Man (PAS-Kubang Kerian) whether the government intends to retrieve all assets and money relating to 1MDB that have been seized by the US Department of Justice, Mahathir said the government remained committed to that cause.

“Since we took over as government, we have taken effort to trace all forms of corruption committed by the previous administration.

“We will continue to do look for all the money and assets, and will try our best to retrieve them back to the country,” he said.