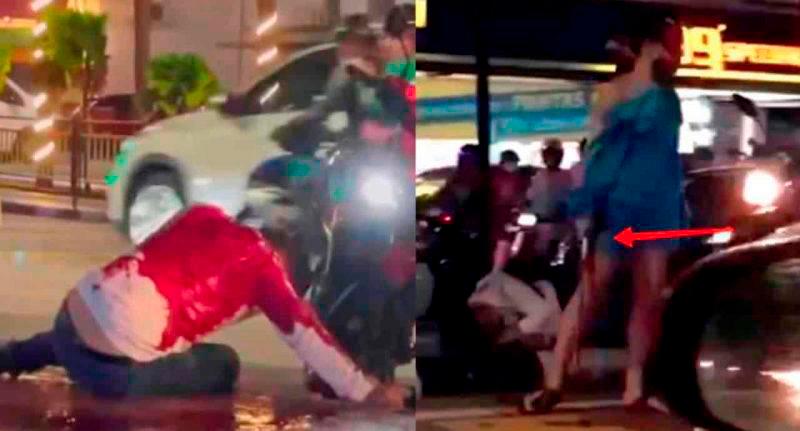 Three short videos of the incident, which were shared on social media, showed the injured victim on the ground covered in blood. Credit: Social media.

BUKIT MERTAJAM: Revenge is believed to be the motive behind the murder of a man in his 30’s in Kampung Baru on Saturday.

Central Seberang Perai police chief ACP Shafee Abdul Samad said yesterday that police are looking for four male suspects who were involved in the attack and are believed to have gone into hiding following the victim’s death.

“We are on the lookout for the suspects and we will only know more details of the motive behind the attack after apprehending them,” he said.

Three short videos of the incident, which were shared on social media, showed the injured victim on the ground covered in blood.

A woman was also seen holding a parang in one of the video clips, giving the impression she was involved in the attack.

However, Shafee clarified that the woman, who is also in her 30’s, was the girlfriend of the victim and investigators learnt that she was holding a parang as she had earlier taken possession of it to prevent the attackers from using it on her partner again.

He said police have recorded a statement from the woman and it is believed that the suspects were known to the victim.

On Saturday, at about 8.20pm near a food court in Kampung Baru, an altercation erupted between the victim and four men before the former was slashed with sharp weapons, including a parang.

The man, who was seriously injured, was sent to the Bukit Mertajam Hospital where he died while receiving treatment.