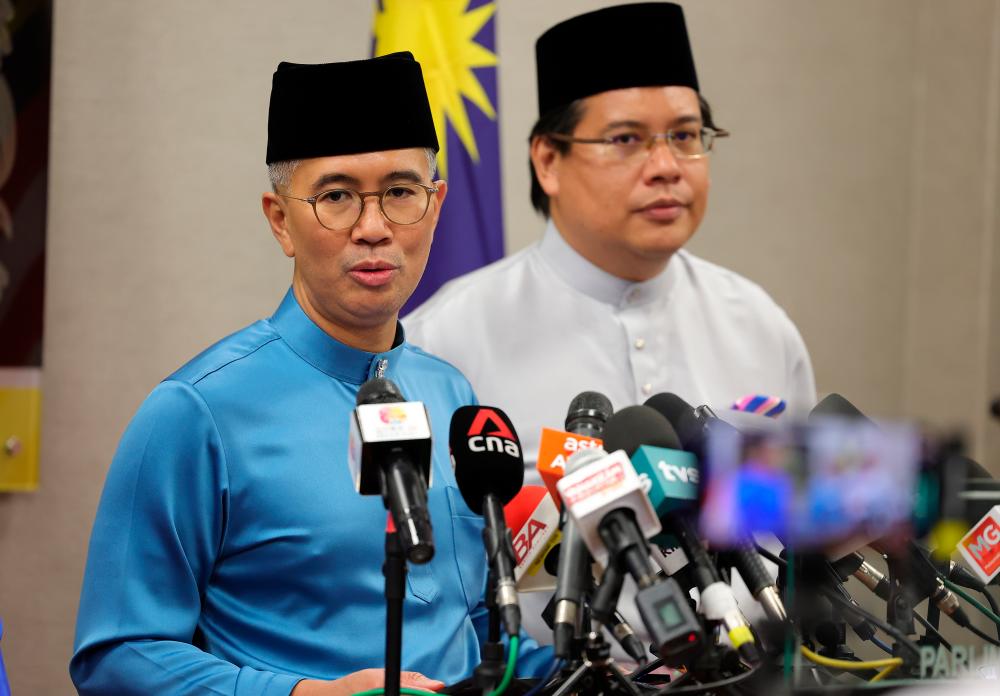 KUALA LUMPUR: Amid constraints in revenue growth and rising challenges, the government has struck a balance between ensuring growth and safeguarding the people’s interest as it gears up to face a possible global recession in 2023 while nursing the scarring effects of Covid-19.

“Themed ‘Keluarga Malaysia, Makmur Bersama,‘ this budget will ensure the wellbeing of the rakyat, continuity of business, and the efficiency of the civil service,” he said at the tabling of Budget 2023 in parliament here today after rumours that it will not be taking place in order to give way for the 15th General Election.

The finance minister said in ensuring that Budget 2023 will be responsive, the government will continue to implement an expansionary fiscal policy so that it will deliver the necessary support to the people and businesses.

“The economic momentum is expected to continue with a solid third quarter growth.

For 2023, Malaysia is expected to see economic expansion moderate to between 4 and 5 per cent.

Although the allocation for Budget 2023 has been expanded to RM372 billion, the biggest budget ever with an expansionary fiscal policy, Tengku Zafrul said as a responsible governmennt, it will be balanced with a commitment to implement fiscal consolidation to ensure financial sustainability.

“Based on the medium term fiscal framework, the deficit level from 2023 to 2025 is projected to reduce to an average of 4.4 per cent of GDP.

“The government will continue to strive to improve its financial position in the medium term to achieve a deficit target of 3.5 per cent of GDP as targeted for in the 12th Malaysia Plan,“ he said.

Under Budget 2023, the Health Ministry has been allocated RM36.1 billion compared to RM32.4 billion this year, which is among the highest allocated for among ministries.

Next year’s budget also provided development expenditure of RM95 billion, the biggest ever allocated and a big jump compared to the RM75.6 billion in 2022.

Of the amount, RM16.5 bilion has been provided for the transport sector through infrastructure projects such as the Pan Borneo Highway, Gemas-Johor Bharu Double Track Rail, ECRL, RTS Link and the Central Spine Road.

“The Sarawak Pan Borneo is expected to be fully completed for the benefit of the people in Sarawak and the Pan Borneo Sabah will be completed by 2024,” the finance minister said.

An allocation of RM11.4 billion has also been provided for upgrading and maintgenance works, including government buildings and federal roads.

The MRT 2 Phase 2, which involves the Kampung Batu Station to Putrajaya Central, is almost completed and is expected to be operational from January 2023 for the benefit of residents in Klang Valley.

For MRT3, the government is committed to complete the rail network in Kuala Lumpur with a range of 50.8 kilometres.

To attract more high value investments and generate professional jobs, a strategic approach will be implemented via the creation of an investment fund worth over RM1 billion.

“In attracting high value investments, the government is committed to achieving a global top ten ranking as a competitive country by 2025 and this commitment needs the cooperation of the public-private sector to be led by a special task force on ease of doing business (PEMUDAH),” the finance minister said.

Due to the geopolitical uncertainty and disruptions to the global supply chain, the government has provided relocation incentives to attract electrical and electronics (E&E) investors who have been affected by global events to relocate their operations to Malaysia through tax incentives and a tax rate of 15 per cent for the C-Suite until 2024.

To encourage the development of phamaceuticals, income tax incentives for local drug companies have been extended to the end of 2025.

To attract new aerospace companies and encourage the expansion of existing ones, tax incentives and investment tax allowances have been extended until Dec 31, 2025.

“Government procurements play an important role as an economic multiplier. For 2023, the government will provide RM3.7 billion to implement small and medium projects nationwide.

“At the same time, to enhance the efficiency of tax administration, the government is implementing two initiatives - the E-Invoice and Tax Identification Number (TIN),” Tengku Zafrul added.

And to enable Malaysia to expand its tax base and continue to be competitive in attracting foreign investments, the government will introduce a minimum effective tax rate at the global level.

For 2023, Digital Nasional Bhd (DNB) plans to implement infrastructure expenditure worth RM1.3 billion so that Keluarga Malaysia can benefit from faster internet speeds and cheaper 5G.

Apart from that, the green technology fund scheme (GTFS) will increase to RM3 billion until 2025, whereby the scope of financing will be expanded to the electric vehicles (EV) sector with a guarantee limit of 60 per cent. Financing guarantee for the residuals sector will be extended to 80 per cent. - Bernama