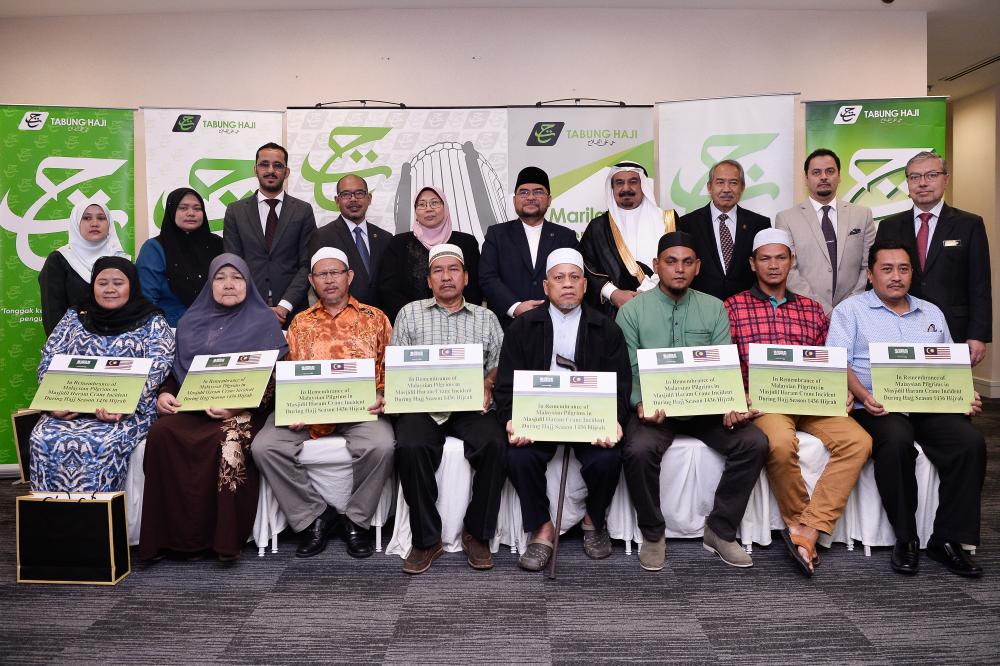 PUTRAJAYA: Saudi Arabia today presented compensation to the families of seven Malaysian pilgrims who were killed when a crane collapsed onto the Grand Mosque in Makkah during the 2015 haj season.

The compensation of SAR 1 million (RM1.17 million) for each family of the victims is a personal contribution from King Salman Abdulaziz Al Saud.

Apart from the families of the deceased victims, three Malaysian haj pilgrims who were injured in the incident also received compensation of SAR500,000 (RM587,574) each.

The compensation was presented to the recipients by Saudi Arabia’s Ambassador to Malaysia, Datuk Dr Mahmoud Hussein Saeed Qattan, representing the Saudi government, at a ceremony held at the Putrajaya Islamic Complex here.

“The compensation given by King Salman shows His Majesty’s concern and we are thankful for his kindness and generosity.

“On behalf of the Malaysian government, I would like to express our heartfelt gratitude particularly to His Majesty King Salman bin Abdul Aziz Al Saud for the empathy and attention given to the Malaysian pilgrims, especially the victims of the collapsed crane incident,” Mujahid said.

While noting that the incident was one of the most unfortunate tragedies for Malaysia, the minister said he believed that it also affected the emotions and concerns of the Saudi Arabian government and the people of the world.

On Sept 11, 2015, a crawler crane toppled over onto the Grand Mosque in Makkah, killing 111 people and injuring over 230 others. The incident caused by strong winds and heavy rains brought the bitter memory of the death of pilgrims who came from Malaysia, Indonesia, Pakistan, India, Bangladesh, Turkey, Algeria, Iran, Iraq, Libya, Afghanistan, and Egypt.

Following the incident, King Salman ordered that SAR 1 million be distributed as compensation to each family of those who died and that two relatives of each of the deceased were to be the King’s guests for Haj in 2016.

Mujahid said the compensation money would be managed by Amanah Raya Berhad to ensure smooth distribution to all the deserving families and victims.

He said the Saudi Arabian government has also set up a top-level committee to scrutinise the names of victims involved in the incident and decided that only three injured pilgrims from Malaysia are eligible for the compensation.

“Prior to this, we have tried, through negotiation, to get the compensation for all Malaysian pilgrims involved, but they (Saudi Arabia) decided to give it to only three who were severely injured. That is their decision, not ours,” he said.

Earlier in his speech, Mujahid said TH had ensured that the family of the victims received expeditiously the RM20,000 benefit in addition to the RM20,000 awarded under the Takaful protection.

“The injured victims were also given RM2,000 each. Besides, Lembaga Tabung Haji had immediately visited the victims’ families after the incident to provide condolences and relevant supports that they may require. The Hajj al-Badal was also performed for the deceased,” he said.

Meanwhile, Dr Mahmoud Hussien said the Kingdom of Saudi Arabia will continue its efforts to better develop and enhance the services provided to pilgrims.

He said expansion projects and developments in various sectors will continue in Makkah, Madinah and the holy sites in order to reach the goals of Vision 2030 which aims to reach the number of Mu’tamirs (umrah pilgrims) annually to about 30 million. - Bernama