Schools, except for Phase One states, to reopen Oct 3 — Radzi (Updated) 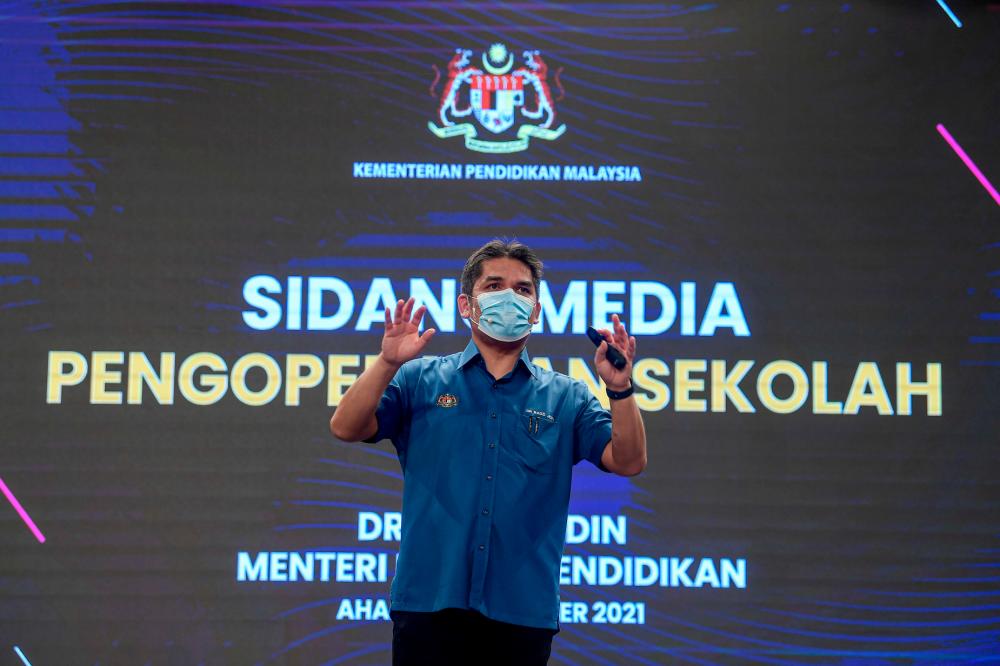 PUTRAJAYA: Schools will reopen in stages from Oct 3 according to the phases of states under the National Recovery Plan (PPN), Education Minister Datuk Seri Dr Radzi Jidin said.

In a media conference to announce the reopening of schools today, Radzi, who is also a senior minister, said the 2021 schooling session will be extended to March 2022 so that intervention among weak students can be carried out on the grounds that they have not attended classes for some time.

In addition, he said students will take turns to attend school, with attendance set at 50 percent of the classroom capacity to reduce the risk of Covid-19 transmission.

Radzi said all schools in Phase One of PPN, however, will remain closed and their students will continue with home-based teaching and learning (PdPR).

As for Phase Two states, special needs students will be allowed to attend school without any rotation while primary pupils will continue with PdPR.

He said for secondary students in Phase Two, only Form Six second semester students, third semester students of Sports Schools pre-university programmes and those taking international examinations will be allowed to attend school.

As for states in Phase 3 of the PPN, the reopening of schools will also include preschool and private kindergarten pupils without rotation, while for secondary schools, it will involve full boarding school students sitting for public examinations (without rotation) and daily or private schools sitting for public examinations (rotation), Radzi said.

For states in Phase 4, he said Years One, Two, Three will attend school on a rotational basis from Oct 17 onwards, he added, while Years Four, Five and Six will do the same, also on rotation, from Oct 31.

On vocational schools, Radzi said schooling will first resume with Phase two states and onwards on rotation according to the examinations they are sitting for and semesters they are in.

He also said that Institutes of Teacher Education (IPG) and Matriculation College students in Phase One and Two will continue PdPR, while those in Phases Three and Four who have been fully vaccinated with the Covid-19 vaccine will be given the choice to attend campus while those unvaccinated will continue with PdPR.

For Phase Four students, class capacity is increased to 70 percent, also on rotation, from Oct 17 while full capacity with physical distancing will be allowed from Oct 31.

He said that the reopening of schools in areas that have been classified as travel bubbles will follow Phase Four operations. — Bernama All Blacks squad hit by Covid ahead of first Ireland Test All Blacks squad hit by Covid ahead of first Ireland Test

4.All Blacks squad hit by Covid ahead of first Ireland Test