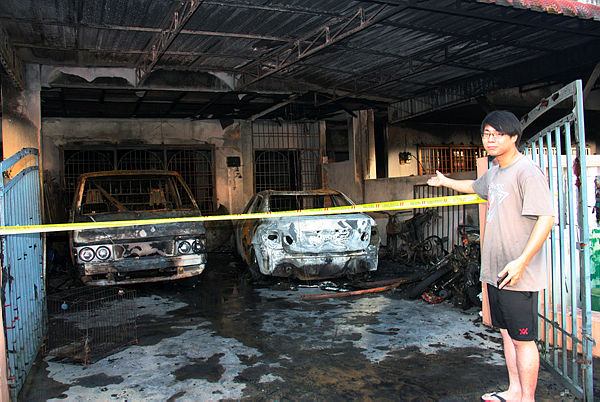 TAIPING: Seven units of double-storey terrace houses, four motorcycles, a van and a car were razed in a fire in Taman Tupai Mas here, early this morning.

There was no casualties in the fire but a man, Ng Teong Chuan, 60, suffered burns on his right shoulder while trying to save his motorcycle.

“The houses were 80% destroyed and firefighters succeeded in controlling the fire from spreading to the other houses nearby within 15 minutes. The fire was completely brought under control by 5.35 am,” he said when contacted by Bernama here today.

Meanwhile, a victim, Lian Wai Hung, 24, said he was sleeping upstairs when he heard his mother and father sleeping downstairs, screaming.

“I woke up to the sound of an explosion and saw the fire at the car and motorcycle parking lot and we rushed out,” he said, adding that a van, a car and three motorcycles belonging to his family were destroyed in the fire.

Taiping district police chief ACP Osman Mamat when contacted said the police and forensic unit had conducted investigations but did not find any inflammable substance at the scene.

The probe also found no criminal element while the cause of the fire was being investigated, he added. — Bernama

4.Not the right time to impose upward revision of electricity tariff, says FMM