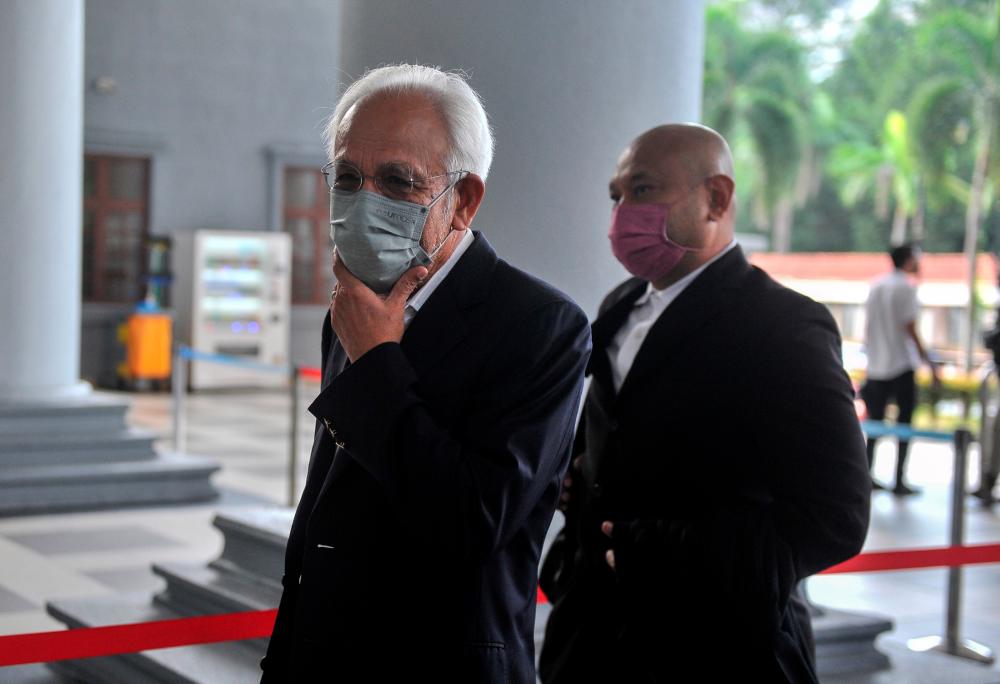 KUALA LUMPUR: A businessman told the High Court here today that he received a payment of RM549,090 from Tan Sri Shahrir Ab Samad to carry out the rehabilitation works on the Puri Langkasuka project in Larkin, which had been abandoned for eight years.

“I personally submitted the three invoices dated March 22, 2014 to Tan Sri Shahrir regarding the repair works for Block C, D and E of the project. I have instructed the employee of my son’s company named Zul to issue those invoices,“ said the 10th prosecution witness.

He said this in his witness statement at the trial of the former Johor Bahru MP, who is charged with failing to declare RM1 million which he received from Datuk Seri Najib Tun Razak to the Inland Revenue Board (IRB).

According to the witness, he used his son’s company to issue the invoice because he did not have his own company.

Syed Mohsin said that in October 2013, Shahrir had asked him to find a contractor for the project which is now known as Sri Anugerah because the politician knew that he had many friends who worked as contractors.

“Since we know each other very well, I agreed to help him (Shahrir). Tan Sri Shahrir and I visited the project site and we discussed on the payment for the rehabilitation works and when it can begin,“ said Syed Mohsin, who has known Shahrir for over 30 years.

Syed Mohsin said he had started the rehabilitation works including repairing the damaged doors, flooring and wiring in October 2013 using his own money to buy building materials, pay the suppliers and workers’ wages.

When he had run out of financial capital, the witness met Shahrir at his office and asked for payment.

Asked by deputy public prosecutor Mohd ‘Afif Ali, if Shahrir had told him about the source of the money, Syed Mohsin said: “No.”

Questioned by Shahrir’s counsel, Datuk Syed Faisal Al-Edros Syed Abdullah Al-Edros, on whether Shahrir was someone who can be trusted because he used his own money to pay for the project, Syed Mohsin said: “Yes, I can trust Tan Sri Shahrir because he is the best people’s representative.”

Earlier, the former owner of YM Auto Wheels Enterprise, Syed Yussof, 30, who is the son of Syed Mohsin told the court that the three invoices were signed by his father.

Asked by deputy public prosecutor Rasyidah Murni Azmi if he knew that his father had used the company’s name for the project, Syed Yussof said that he knew it, but did not receive any commission from his father.

Shahrir, 72, was charged with money laundering, by not stating his real income in the Income Tax Return Form for Assessment Year 2013, which is a violation of Section 113(1)(a) of the Income Tax Act 1967, on the RM1 million, believed to be from unlawful activities, which he received from Najib through a cheque.

The charge, framed under Section 4(1)(a) of the Anti-Money Laundering, Anti-Terrorism Financing and Proceeds of Unlawful Activities Act 2001, provides a maximum fine of RM5 million, or imprisonment for up to five years, or both if found guilty. GLCs, GLICs committed to invest up to RM50b next year: Tengku Zafrul

Budget 2023: One-off assistance of RM500 for women from BKM households who give birth next year

1.Socso contributions compulsory for self-employed from next year

5.GLCs, GLICs committed to invest up to RM50b next year: Tengku Zafrul