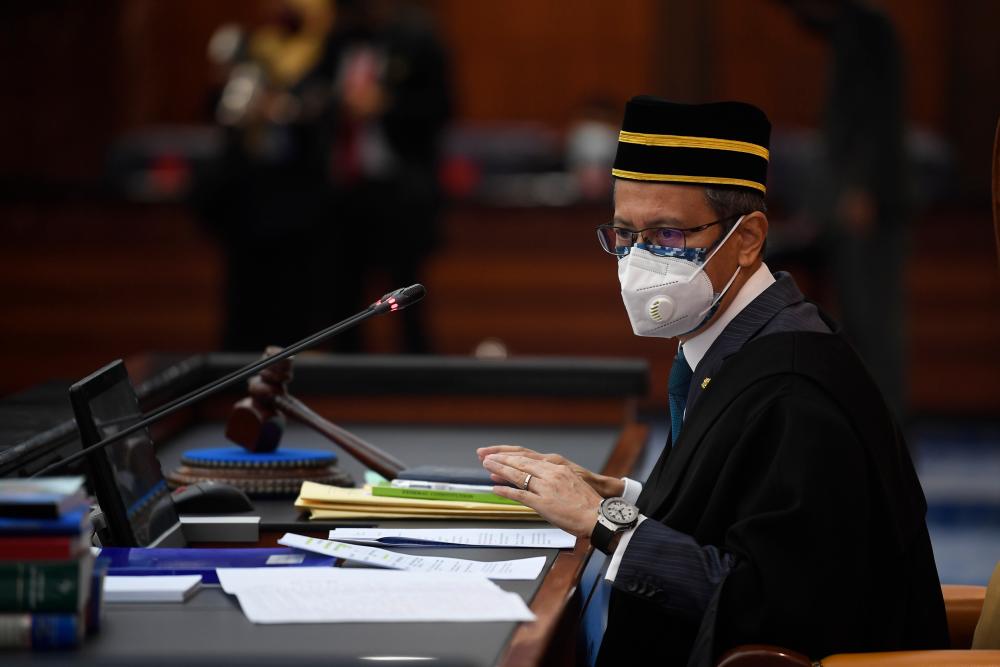 KUALA LUMPUR: Any questions or clarifications on revoking the proclamation of emergency will be replied by the Minister in the Prime Minister’s Department (Parliament and Law) Datuk Seri Takiyuddin Hassan on Monday.

During a Special Sitting of Dewan Rakyat today, Speaker Datuk Azhar Azizan Harun (pix) was firm on his decision yesterday despite repeated pressure by MPs especially from the opposition bloc who demanded an immediate explanation.

“I have said that yesterday and I have also informed the Law Minister that he needs to answer all questions raised by all Honourable Members on what he said yesterday.

“He (Takiyuddin) needs to give clarifications as well as on the procedure whether it received the consent of the Agong or not, ...let us wait until Monday,” he said.

The issue of revoking the Emergency Ordinance was raised again in the Dewan Rakyat today when MPs in the opposition bloc repeatedly asked Takiyuddin to provide an immediate explanation without waiting for Monday as it involved public interest.

Azhar also urged all MPs to abide by the set Order Paper which encompassed a period of five days at the briefing session of the minister yesterday.

“Let us adhere to the Order Paper as it has been published earlier and the matter on the emergency on Monday...because I want to start this proceeding so that we have sufficient time to debate the matter one by one,” he said.

Earlier, several opposition MPs stood up to seek clarifications including Datuk Seri Anwar Ibrahim (PH-Port Dickson) who questioned whether the revocation of the Emergency Ordinance had been presented to the Yang di-Pertuan Agong.

“Now, when the minister announced the revocation of the Emergency Ordinance, we want to know whether it was presented to the King and received his consent? Even that the Speaker cannot agree to reply...never mind the details, I agree with the Speaker we will discuss on Monday.

“...but we want know substantively, this cannot be delayed as it involves a five-day discussion process, it is also wrong as he had revoked it on July 21,” said the opposition chief.

Tan Sri Noh Omar (BN-Tanjong Karang) who intercepted also questioned what was his role as a member of the Special Independent Emergency Committee 2021 if the decision relating to the revocation or extension of the emergency was not discussed with him.

“If it is true the emergency has been revoked, then there is no point discussing anymore,” he said.

The committee set up under Section 2 of the Emergency (Essential Powers) Ordinance 2021, has the role of advising the Yang di-Pertuan Agong on continuing with the emergency in Malaysia and its termination. -Bernama