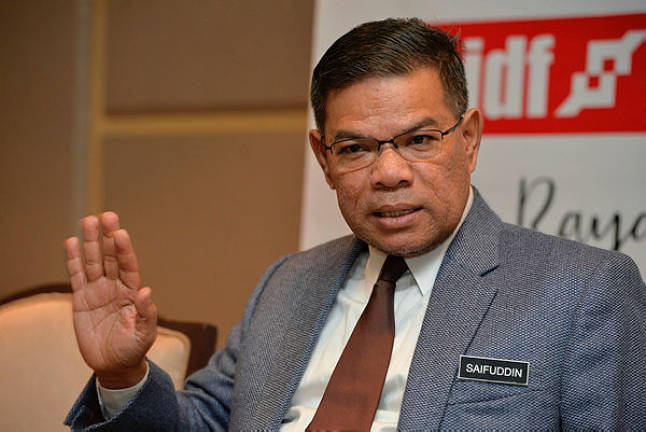 PUTRAJAYA: The government will provide a monthly petrol subsidy of RM30 for car owners and RM12 for motorcycles owners from next January.

Domestic Trade and Consumer Affairs Minister Datuk Seri Saifuddin Nasution Ismail said the subsidy will be paid on a quarterly basis from April.

He added that all handicapped people will also be given the subsidy, adding some 2.8 million vehicle owners are expected to receive the subsidy for RON95 fuel which will cost the government RM65.4 million a month.

“It was decided that the targeted subsidy would be for owners with cars below 1600cc but it will also be extended to those who own similar engine capacity cars and above that are over 10 years old.

“As for motorcycle owners, those who own bikes of 150cc and below will receive the subsidy and also those who own motorcycles above seven years and which are 150cc and above,“ he told the media when announcing the petrol subsidy programme.

Saifuddin said the subsidy will be limited to B40 households whose income is RM4,000 and below.

He said there are about 45,000 people who qualify for the subsidy but do not have a bank account and the ministry will be working with banks to get them one.

He said it does not matter how many vehicles a person owns but the subsidy will be limited to RM30 for car owners and RM12 for motorcycle owners.

He said if a person owns a car and a motorbike, then he would receive the higher subsidy, which is only for the car.

“The subsidy would not be extended to Sabah, Sarawak and Labuan due to the high usage of diesel there,“ he said.

Saifuddin said the petrol price would remain fixed at RM2.08.

“In peninsular Malaysia the government will apply the gradual increase in petrol price mechanism for RON95 users.

“This is because of the 1.2 billion litres of petrol sold, only 10% of users buy RON97 whilst 90% use RON95 and the government will be implementing the floating price mechanism from Jan 1 to make it fairer,“ Saifuddin said.

He warned businesses not to simply increase prices just because the government is introducing the floating price mechanism for petrol.

He said from Oct 15 onwards the public can check and see if they qualify for the subsidy at psp.kpdnhep.gov.my

He said if anyone feels they have been left out they can register on the same portal.

He added that a person from the B40 group who buys a car or motorbike in the next few months should register on the ministry’s portal.

Saifudfin said if the petrol price drops below RM2, the government will relook the subsidy and may defer its implementation.

He said even at RM2.08 the government is subsidising RON95 by 30sen. 2.Penang urged to seek federal govt’s help to put out fire at landfill