Three killed in shootout with police in Bukit Mertajam 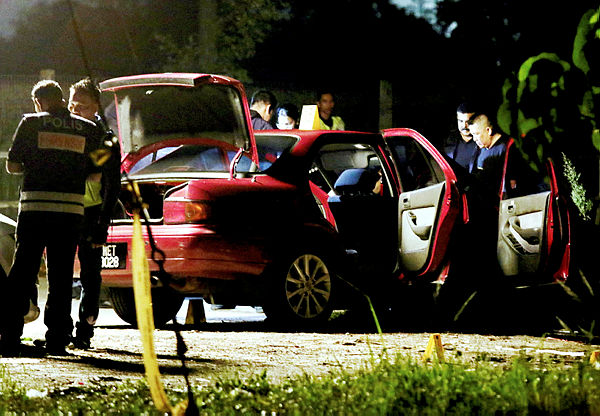 Forensic investigators at the scene of an incident involving three foreign criminals who were shot dead by police at the Alma Light Industrial Area, in Bukit Mertajam area early this morning. — BBXpress

GEORGE TOWN: Three men, believed to be foreigners and members of the notorious ‘Geng Tebuk’ that were involved in a spate of robberies as well as house and factory break-in cases, were killed in a shootout with the police at the Alma Light Industrial Area, in Bukit Mertajam near here, early this morning.

Penang police chief Datuk T. Narenasagaran said state Serious Crime Investigations (D9) Division personnel were patrolling the area at around 2am when they spotted a Toyota Camry car being driven in suspicious manner.

“The police then attempted to approach the car for inspection when the driver suddenly sped off causing a chase to ensue until the car skidded onto the road shoulder,” he told a press conference, here today.

He said three men jumped out of the car and fired shots and attacked the police with parang and to defend themselves, police fired shots at those men.

Investigations found that three men in their 20s and 30s were killed in the shootout and police found, among others, a .38 revolver with four live rounds of ammunition and two bullet casings, two parangs, a metal cutter, a knuckle duster and grinders.

Narenasagaran said the Toyota Camry car, believed to be used by the gang for house and factory break-ins was seized and police also believed that they took part in more than 15 cases in the state since last year involving losses amounting to RM620,000.

“Initial investigations revealed that the three men were trying to break into a factory in the area when the police spotted them,” he said.

He said police were conducting patrols around the industrial area after receiving numerous reports of break-ins and investigations found that gang members had the expertise to break into the factories through the roof before opening the safe and stealing money or any other valuables there.

Police believed that there were group members still at large and efforts were being made to track them down, he added.

He declined to reveal the three men’s country of origin until police investigations were completed, including obtaining their citizenship documents. — Bernama