Two M’sians evacuated from Wuhan share their experience in quarantine 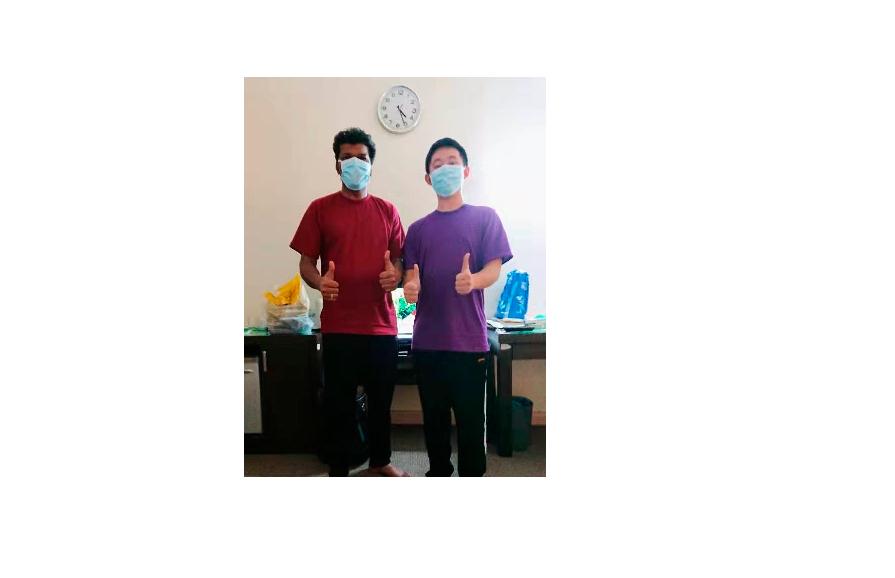 Balachandar (left) and Ivan give the thumbs up at the quarantine centre.

SIBU: Civil servant Balachandar Subramaniam says he will head straight to the temple to pray for thanksgiving and protection the moment he leaves the quarantine centre.

He said he will bring along his wife and two children, who are currently staying together with him at the Bandar Enstek Academy quarantine centre in Nilai, Negri Sembilan, when he visits the nearest temple from the quarantine centre.

After that, he said he will head to his house at Sabak Bernam before proceeding to the house of his in-laws in Perak to meet up with his family members and to express gratitude to all of them for showing their undivided support during their difficult times.

“Indeed, this is something that has been floating in my mind ever since I was holed up in my apartment in Wuhan,” he said when contacted by The Borneo Post.

Balachandar, who is from Selangor, and his university mate Ivan Yeo from Bintulu, were among some 100 Malaysians who were evacuated from Wuhan on Feb 4 after the city went into lockdown on Jan 23 due to the Wuhan coronavirus outbreak.

It has been Day 5 since Balachandar went into surveillance at the quarantine centre and everything has been going on routinely and systematically well.

He said they were provided with all the necessities like food, laundry services, detergent, pail, kettles, pampers and even brushes, just in case they want to wash their own clothes.

“Life here (in the Bandar Enstek Academy centre) is a lot better compared to my stay in Wuhan which was full of anxiety. Here, it’s a different story as we are basically monitored by the relevant authorities on our health condition every day,” Balachandar said.

He added all of them could leave their room for a breath of fresh air at the corridor but were not allowed to meet other people in the quarantine centre.

“Any contact can only be made through our hand phone,” he said, adding that all the medical officers would also come routinely to check on their temperature.

Meanwhile, Ivan said he plans to come up with an article or even a book on his ordeal throughout the journey.

He admitted it was scary when they were initially stranded in Wuhan but things were getting better now.

“I must say the whole management team of the quarantine centre has done a great job in looking after us,” he said.

At the quarantine centre, Ivan said he spent about 23 hours in his room and to pass his time, he would read news and do some of his research work.

Balachandar had been working in Kuching, Sarawak since 2003 as a geochemist with the Mineral and Geosciences Department, a federal department under the Ministry of Water, Land and Resources.

In 2017, he went to Wuhan to pursue the PhD at the China University of Geosciences, a scholarship given by China Government Scholarship Council, which is a co-operation between the Asean Geological Institute and China Geological Survey Chengdu Centre.

To date, the virus that emerged in Wuhan, Hubei province at the end of last year has infected more than 30,000 Chinese citizens and claimed more than 630 lives. — TheBorneoPost

4.1MDB gets permission to serve writ of summons to six parties overseas