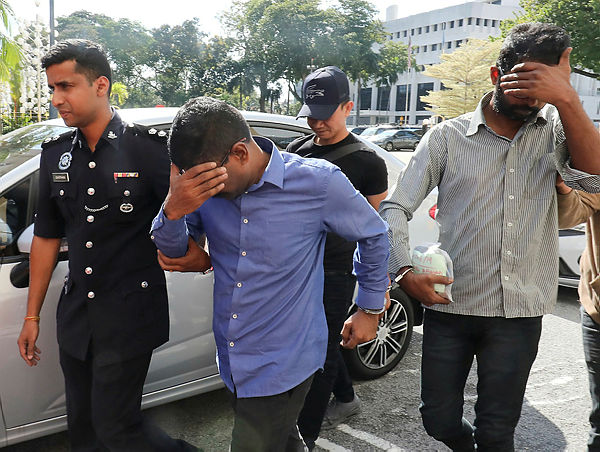 The two famous nasi kandar restaurant staff in Bukit Jambul being led by police to obtain a 7 day remand order against them after lodging false police report that the eatery’s three day’s takings worth RM122,555 were robbed by armed robbers — Sunpix by Masry Che Ani

GEORGE TOWN: Police have remanded two workers of a nasi kandar outlet here for lodging a false report that they were robbed of RM125,555 while on their way to a bank to deposit the weekend takings.

The false report had apparently contributed to a higher load of traffic congestion around the island on Monday, as police were forced to set up roadblocks near the Penang Bridge to intercept the “robbers” from fleeing the island.

The two suspects, who are India nationals, were brought to the magistrate court here today morning where they were ordered to be remanded for seven days.

At 2pm on Monday, the two suspects lodged a report alleging that they were waylaid by two robbers wearing full-faced crash helmets while they were on their way to a bank in I-Avenue near Bukit Jambul.

They claimed the two robbers fled on a motorcycle after grabbing their takings of RM125,555 at Lebuh Nipah II here.

The nasi kandar outlet is located near Bukit Jambul.

Roadblocks were then set up at strategic areas around the island, including on the first bridge but this also led to a traffic crawl because there were more vehicles on the road due to the school holidays.

Detectives combing the crime scene began to grow suspicious as they could not find any leads or evidence of a robbery.

They began to question the two workers for the second time.

The duo then succumbed to the pressure, and confessed that the report was false.

Instead, they said the money was actually hidden in the trunk of their car.

Meet the new characters of Netflix’s You season 3

At least 25, including minors, died in illegal refinery blast in Nigeria

1.Meet the new characters of Netflix’s You season 3

3.At least 25, including minors, died in illegal refinery blast in Nigeria