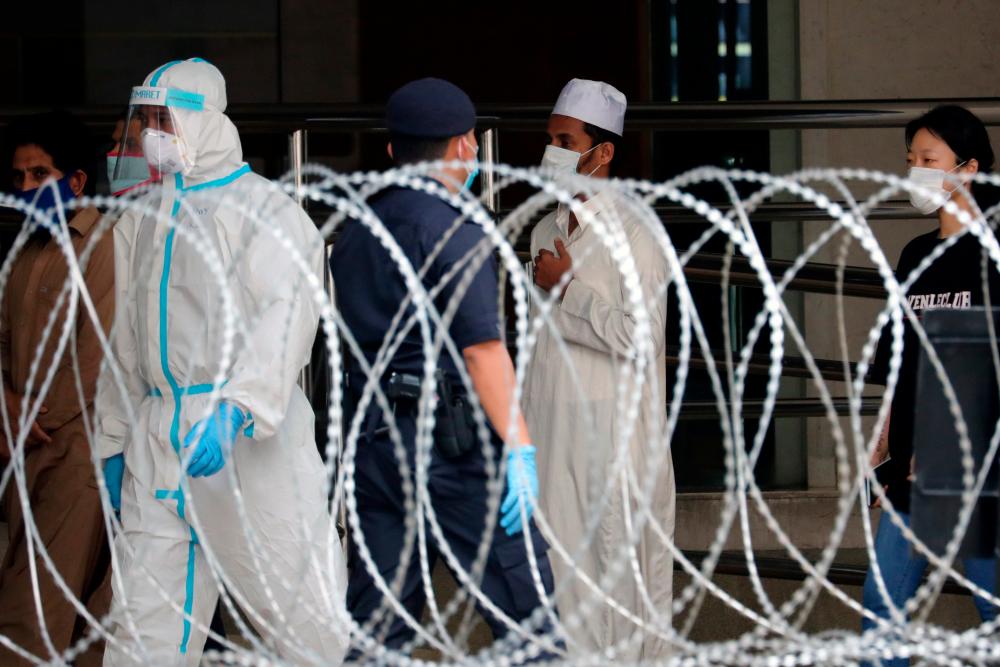 Illegal immigrants wait in line to be picked up by immigration officers outside an apartment under enhanced lockdown, during the movement control order due to the outbreak of the coronavirus disease (COVID-19), in Kuala Lumpur, Malaysia, May 1, 2020. — Reuters

PETALING JAYA: The United Nations (UN) in Malaysia today voiced its concern over the large-scale arrests of undocumented migrants in Kuala Lumpur yesterday.

Its Head of Communications and Advocacy, Ahmad Hafiz Osman, said persons, especially the most vulnerable – including migrants, refugees, asylum-seekers and the stateless - should have access to health services and assistance without fear of negative repercussions.

“The fear of arrest and detention may push these vulnerable population groups further into hiding and prevent them from seeking treatment, with negative consequences for their own health and creating further risks to the spreading of Covid-19 to others,” he said in a statement issued today.

“It is of grave concern that the arrests include people in situations of enhanced vulnerability, such as families with very young children,” he said.

He also mentioned that inclusive and non-discriminatory policies are essential to strengthen the response and recovery from Covid-19.

“This is in line with the Malaysian government’s positive announcement in March that screening and treatment for all foreigners, regardless of their immigration status, will be provided free of charge,” he added.

Ahmad Hafiz pointed out that in line with Article 25(1) of the Universal Declaration of Human Rights, and with the “Leaving no one behind” commitment of the 2030 Agenda for Sustainable Development, all state parties must ensure that the welfare of the most vulnerable, including migrant communities, are indeed not left behind in this fight against the virus.

“This means to implement as a matter of priority non-custodial and community-based alternatives to detention, and where relevant to avoid immigration detention all together,” he said.

“Overcrowded conditions in immigration detention centres carry a high risk of increasing Covid-19 infection among both detainees and staff.

“It is especially important to prioritise the release of all children and their caregivers from immigration detention,” he added.

Yesterday, Inspector-General of Police Tan Sri Abdul Hamid Bador said authorities involving the police, immigration, the armed forces and health ministry participated in a large-scale joint operation to ensure no undocumented immigrants sneak out from the identified locations during the MCO as part of efforts to contain the spread of Covid-19.