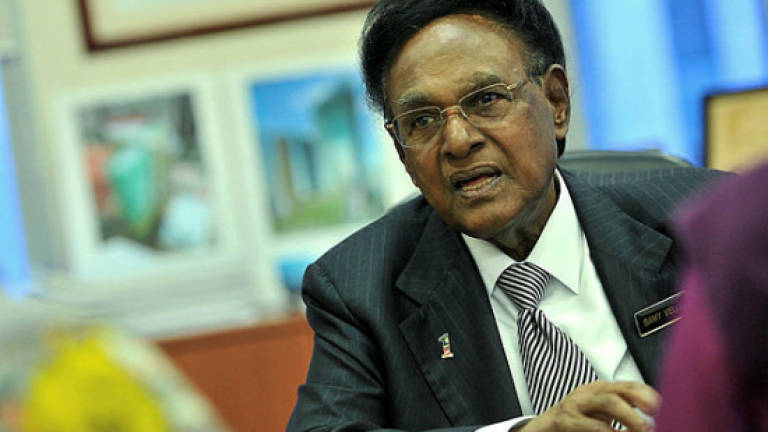 KUALA LUMPUR: Former MIC secretary-general Datuk Seri S. Vell Paari will oppose the application by a woman claiming to be the common-law-wife of his father Tun S. Samy Vellu (pix), 83, to intervene in his lawsuit to have his father’s mental health determined by the court.

Speaking to reporters today, lawyer R.S.N. Rayer who is representing the woman, Meeriam Rosaline Edward Paul, 60, said the plaintiff (Vell Paari) was strongly opposed to Meeriam Rosaline’s application on the grounds that she had no locus standi and no right to intervene in the suit.

Submissions on the matter will be made by the plaintiff when the case continues on March 20.

“It’s up to the plaintiff to rebut the submissions that we have made,“ Rayer told reporters after a hearing of the intervening application before High Court judge Datuk Mohd Sofian Abdul Razak, in chambers, with Ramesh Sivakumar, another lawyer for Meeriam Rosaline, also present.

Asked about Samy Vellu’s health, the lawyer said the former had gone to Batu Caves recently for the Thaipusam festival.

Meanwhile, Meeriam Rosaline said she was hoping to see Samy Vellu soon and to be together again.

Vell Paari filed the suit against Samy Vellu on Dec 2 last year, seeking a court order that an investigation be conducted to ascertain the mental fitness of his father, and whether the former MIC president and Works Minister had the capacity to manage himself and his affairs.

In the suit, Vell Paari sought an order that a date, time and place be set for an investigation to be conducted under Section 52 of the Mental Health Act 2001 on his father, to determine the period his father had been suffering from a mental disorder.

Among others, Vell Paari is seeking a court order to determine if his father is capable of giving orders to his lawyer to act on his behalf.

The court is also being asked to decide on whether consultant neuropsychiatrist and Penang Adventist Hospital neurobehavioural medicine head, Dr Prem Kumar Chandrasekaran, 52, or other mental health experts, should be given access to examine Samy Vellu personally and prepare a report on the defendant’s mental capacity.

In the event that Samy Vellu is found to be suffering from a mental disorder and is incapable of managing himself and his affairs, Vell Paari is seeking that several individuals including himself (as the plaintiff) and lawyer Datuk C. Vijaya Kumar, be appointed by the court as committee members to manage the defendant’s estate.

If the individuals are appointed as committee members, the plaintiff will seek that the court determines the powers of the committee, and sets a provision for its expenses, as well as remuneration to be paid to the members.

Vell Paari is also seeking to be appointed as the defendant’s litigation representative in any legal proceedings involving his father, and his properties or interests.

In a supporting affidavit, Vell Paari said his mother, Toh Puan R. Indrani, 79, and his younger sister, S. Mangayerkarasi, 56, will support the suit through their respective affidavits.

In his suit, Vell Paari is claiming that Prof David Ames, a consultant psychiatrist from Victoria, Australia, diagnosed his father with dementia in 2017 and had prescribed medicines for his condition.

He is also claiming that consultant psychiatrist from Pantai Hospital, Dr Bharathi Vengadasalam, had provided reports that Samy Vellu was suffering from a major neurocognitive disorder and was incapable of managing his finances and estate, and making decisions. - Bernama