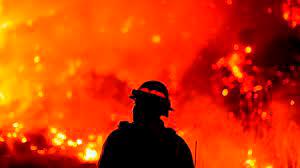 The Selangor Operation Movement Centre said in a statement, it received a distress call through the Malaysian Emergency Response Services (MERS) 999 line at 7.12 pm and arrived at the scene at about 7.22 pm.

Fire and rescue stations in KLIA, Cyberjaya and Serdang deployed their machines and 39 firemen to the location.

“The fire destroyed 50 per cent of the warehouse. No fatalities were reported,” read the statement.

Firemen managed to put out the fire at 8.45 pm. -Bernama