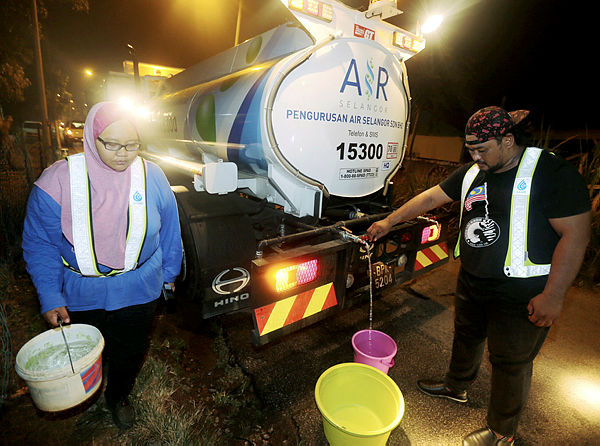 PUTRAJAYA: Water supply to the homes of 1.5 million residents in Selangor started restoration in stages from last night, and it is believed that the restoration will be completed within 72 hours.

Announcing this today at a press conference, National Water Services Commission (Span) chairman Charles Santiago said according to water provider Air Selangor Sdn Bhd, flushing works had begun at 1pm this afternoon to normalise operations at the Sungai Semenyih water treatment plant, after which the restoration of water supply to homes will begin.

“Hopefully in three days, the whole of Selangor will be able to get water,“ he said.

Odour pollution detected on Saturday in Sungai Semenyih, and which suspended operations at the Sungai Semenyih and Bukit Tampoi water treatment plants, is reported to have occurred near the sewage plant of Indah Water Konsortium Sdn Bhd (IWK).

Santiago said investigations had found that about 50 cubic metres of illegal waste which had polluted the existing water system, consisted of waste such as engine oil, oil waste from restaurants and waste from industries.

As such, he said, Span had requested local authorities to monitor restaurants and eateries to check on whether they were using grease systems or oil traps.

The commission had also asked the local authorities to monitor illegal industries, specifically large car workshops, to prevent the recurrence of the odour pollution, Santiago said, adding that Span will be writing to the Housing and Local Government Ministry to ensure this was implemented across Selangor.

Santiago said IWK had been asked to come up with a proposal to prevent the recurrence of such pollution as two such incidents had already occurred at its premises.

Other action being contemplated includes the sealing of manholes with plugs, the installation of closed-circuit television (CCTV) and sensors at manholes, and 24-hour surveillance at water treatment plants

“We view this issue seriously and I guarantee that if IWK or Air Selangor do not follow the plan as discussed, SPAN will take serious action. The time for discussions has passed, it is time now to act,“ he said. — Bernama