We will check recordings to decide on the classification of the case: IGP 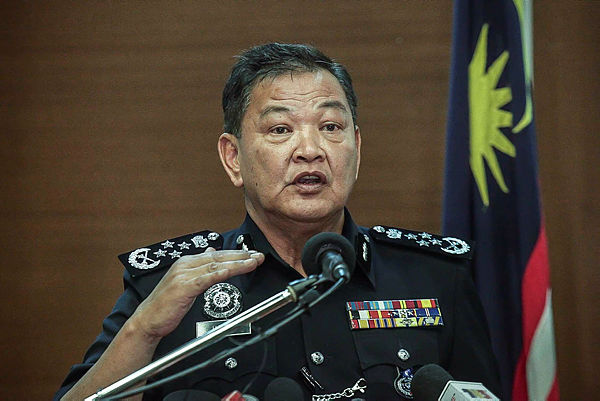 He said investigators would look into the content of the recordings to decide on the classification of the case before commencing investigations.

“I was only informed of it by the Malaysian Anti-Corruption Commission (MACC) this morning and we sent a senior police officer to look into it. We do not know head or tail about it yet. I will wait for my officers to brief me on it,” he told theSun yesterday.

“We’ll give them to the authorities and let them know how we got them. When we got them, we went through forensics to identify first who they are and we did our investigations.

“We can easily identify who they are. We are satisfied that the recordings are authentic,” Latheefa said, adding that the dates for each recording were stated in the name of each of the audio files.

The conversations are understood to have revolved around the International Court of Arbitration and the 1Malaysia Development Bhd (1MDB) scandal, including Abu Dhabi-based International Petroleum Investment Company (IPIC).

“There are various serious issues that arise (in the recordings), including abuse of power, criminal conspiracy, obstruction of justice, compromising national security and the fabrication of false evidence through foreign aid and connivers,” she said.

Latheefa also said the conversations were believed to have taken place between Jan 5 and July 29, 2016.

When asked about the timing the clips were made public and why it was not done before Najib’s court cases commenced, Latheefa said the materials were only obtained recently and that MACC was looking at a new set of offences.

“The cases can continue as far as we are concerned, the conversations are about a cover-up of the ongoing cases. We are talking about a new set of offences that have taken place (in) the recordings.

“Based on our expertise (and analyses of) the conversations, we can see there are elements of power abuse.”

Among the conversations was one between Najib and Rosmah, who sounded angry as she instructed him on how to deal with the fallout from the 1MDB accusations by the US Department of Justice.

Another conversation between Najib and Sheikh Mohammed Zayed showed an attempt to cover up alleged money laundering activities in the production of a Hollywood movie by Riza.

Dzulkifli was heard sharing investigation details, believed to be on a case related to SRC International.

Both Najib and Rosmah neither confirmed nor denied if the conversations had taken place and said the next course of action would be taken legally.

“I am shocked by this revelation,” Najib told reporters during a break in the SRC International trial at the Kuala Lumpur High Court.

“Such a thing has never happened in the history of our country. And the timing of it is near the Kimanis by-election. So, I will discuss this with my lawyers.”

“I have nothing to say,” said Rosmah.