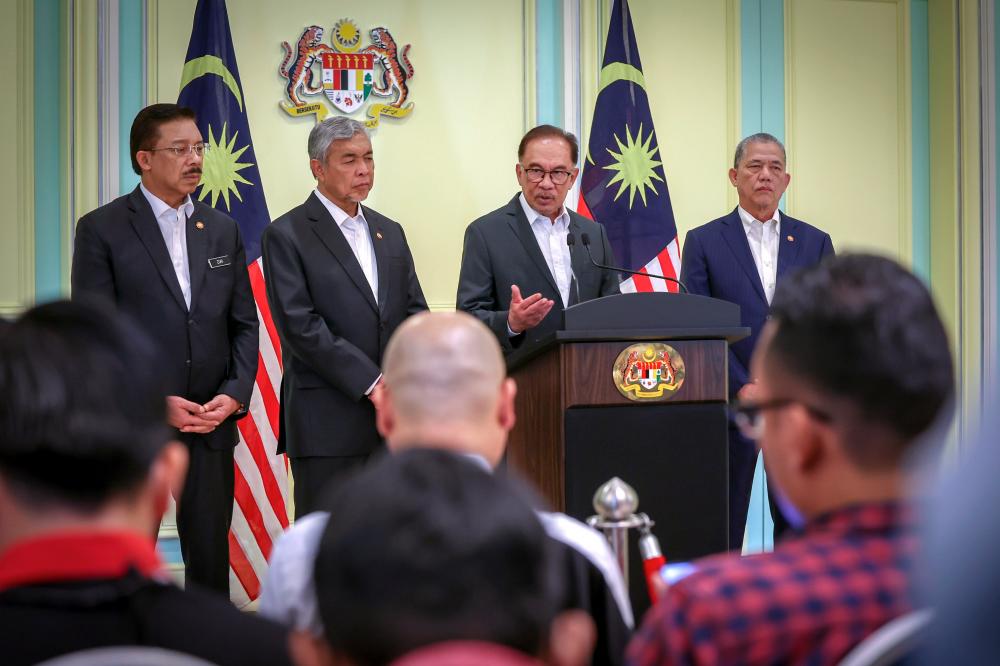 PERHAPS the most important election speech in the entire GE15 campaign is the most recent one by political leader Datuk Seri Ahmad Zahid Hamidi.

Speaking as the nation’s newest deputy prime minister at a political rally to support the Pakatan Harapan (PH) candidate for Padang Serai parliamentary by-election, he said the politics of inclusivity and unity is now more relevant and real than ever before in Malaysia.

Ahmad Zahid, who is also Umno President and Barisan Nasional (BN) chairman, emphasised that his coalition must learn from its mistakes.

“Otherwise, our political lives are of irrelevance. I believe PH is a good political partner.”

He also said now was not the time to look back and talk about the past, especially on the political battles between PH and BN previously.

“It is our fate to work with PH in government and this is the end of the existence of BN and Umno as you know it,” he said.

He hoped that the unity government will continue to work together not only for the next five years but beyond that.

“I hope this is not only for five years, not 10 years, but I hope it will be a grand coalition to form a glorious government to lead the country forward.”

This speech can be seen as a crucial extension of the lead provided by the Yang di-Pertuan Agong and his fellow rulers, who have been instrumental in the formation of the present unity government after the turmoil and uncertainty of the election results.

Can Ahmad Zahid’s speech, which echoes what is a nationwide upsurge of public sentiment in support for the country and its citizens to close ranks and reject the politics of racial and religious polarisation, see the beginning of a restructuring of the current composition of the current racially and religiously-based parties in Malaysia?

Why the need to evolve from the present coalition party structure

It is a fact that among the modern democracies of the world, few countries have seen the phenomenon of the dominance of racial and religious political parties as has happened in Malaysia.

Other post-colonial nations with similar multi-racial populations have been able to move away from the identity and ethnoreligious politics, which remain entrenched in Malaysia.

It is also a fact that although coalition parties have provided an important beginning for the nation’s development and stability in the early years after independence, they have lost their way in bringing about national unity and social cohesion.

This entrenchment of identity and ethnoreligious politics in the current coalitions and the debilitating effect on the nation’s development can be broken if the first and most important step is taken.

This is for the competing coalitions to establish single multiracial parties from their existing component parties and for them to compete for power as single multi-racial yet non-racial parties.

For now, all the major coalitions in the Peninsula and Sarawak and Sabah have the potential to begin the process of giving birth to a single new non-racial or religion-based party.

PH, BN and Perikatan Nasional, although having several parties in each of them, can bring about the dissolution of the current parties in each of their coalition and work for their merger into a single non-racial conventional party, with membership that is not based on race or religion. The same is also possible for East Malaysian coalitions.

Quite apart from the positive impact this can have on dampening the intra and inter-party dynamics and rivalries based on communal issues and interests that dominate the coalitions, this move away from the present configuration of coalition parties can break the colonial construct, and divide and rule policies that have been rooted in our governance.

Membership and leadership of non-racial and multi-racial parties have the strong possibility of taking away the oxygen of communalism and sectarianism that will continue to poison politics and the other spheres of life.

Requirements to fulfil for the emergence of single non-racial parties

At least four requirements must be met before single non-racial parties can emerge. These are:

Leadership by the dominant party in each of the coalitions, that is, PKR, Umno, Bersatu (Peninsula), PBB and Bersatu (Sabah) to convince the other parties of the practicality and wisdom of the merger;

Support by Sabah and Sarawak parties and confidence that their participation in the single non-racial party will not sideline their concerns and state political agendas; and

For now, if Ahmad Zahid’s speech is anything to go by, Umno, which has been the dominant Malay party since independence, may be open to the formation of a single multiracial party.

Should Umno be able to take the lead, the party may well provide the nation with a model in the race to decommunalise politics through the party system.

This race to decommunalise parties may also become attractive to other coalitions and parties.