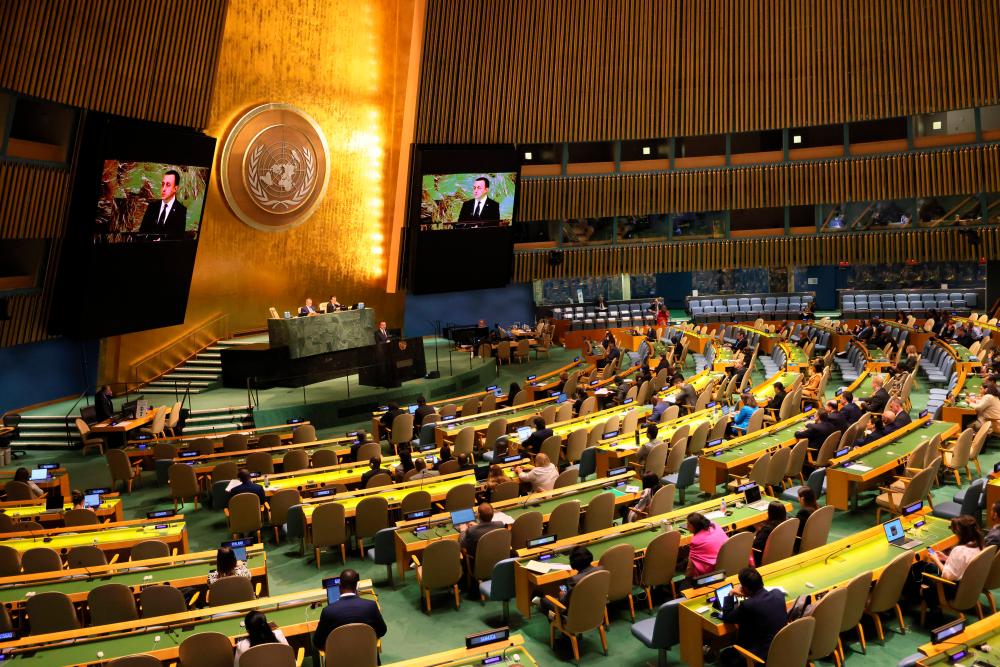 FOR the first time in three years, world leaders gathered in New York for the 77th session of the United Nations General Assembly. AFPPIX

FOR the first time in three years, world leaders gathered in New York for the 77th session of the United Nations General Assembly.

The invasion of United Nations (UN) member country Ukraine by Russia, a permanent member of the UN Security Council (UNSC), early this year could cast a shadow over the assembly.

“The general assembly is meeting at a time of great peril,” UN secretary-general Antonio Guterres said at a press conference recently.

Many UN diplomats said that Russia had put the UN’s credibility and image at stake this year by invading another UN country, with the UN unable to convince Russian President Vladimir Putin to stop his country’s aggression.

The main question that needs to be asked now is about the role the UN should play in ensuring international peace and having the ability to stop any of its members from breaking international laws and launching any acts of aggression.

The time has come for the UN to enact major reforms to remain relevant on the world stage and have the ability to deter any member countries from becoming an aggressor not only toward other nations but also toward their people.

It would be very difficult for the UN to play an influential role due to the existing weaknesses which have plagued the UN since its creation 77 years ago.

Among the noticeable weaknesses that the UN has is the special treatment and power given to a few of its members.

This special treatment and power are widely known to us as veto powers.

Such power was only given to a selected few countries when the UN was created in 1945 after the end of the Second World War.

These few countries are Russia, China, the US, France and the UK. They are also permanent members in the UN.

It was given through Article 27(3) of the UN Charter itself.

Such special treatment and power given to these few countries by the UN have made them spoiled and at times egotistical and arrogant.

They began to see themselves as superior to other nations and immune from any action.

As a result, they began to think they could do anything without having to worry about being penalised by anyone, even by the UN.

Because of this, it also gave them the means to deploy military and aggressive action against any nation and their people with impunity.

For many years, veto power has been abused by the permanent members to serve their interests.

As a result this, many major issues and conflicts around the globe are still happening.

The ongoing conflict between the Palestinian people and Israelis has forced the Palestinians to confront many obstacles due to the extensive use of such veto powers by the US against many UN resolutions, which condemned the Israeli government for all the acts of terror and aggression against Palestinian civilians in the occupied territories of the West Bank and Gaza strip.

The impact of this veto power has also affected Malaysia in 2015, when Russia used its veto right in the UNSC to block a five-nation proposal initiated by us to establish an ad hoc criminal international tribunal to try those responsible for the downing of MH17 on July 17, 2014, in Eastern Ukraine, which had killed 298 people, including 43 Malaysians.

The Russian act of using its veto power to block the proposal was condemned by many nations, which saw the move as an act to prevent an attempt to bring the perpetrators to justice.

In 2014, despite repeated appeals by senior UN officials over accountability for crimes committed in Syria, the UNSC was unable to adopt a resolution that would have referred the situation in the war-torn nation to the International Criminal Court due to the veto vote by Russia and China.

The resolution, which was backed by 13 members of the council, would have given the court the mandate to investigate the horrific crimes committed during the conflict in Syria.

Since March 2011, the country has ramped up over 100,000 civilian deaths, forced the displacement of millions and been accused of widespread violations of human rights.

These are only a few examples of the consequences of abusing the veto power.

The UN is an intergovernmental organisation created in 1945, to promote international cooperation and replace the League of Nations, which failed to stop the atrocities of the Second World War that resulted in millions of casualties and widespread destruction.

However, in light of the increasingly global conflict such as the fighting in Syria, the suffering of the Rohingyas in Myanmar and Uighurs in China, the rise of militants and extremist groups in several countries, the ongoing struggle of the Palestinians and the latest Russian aggression against Ukraine indicate that the UN, as the world’s most important international body, has failed to carry out its basic function.

Many see the UN as weak and under control by the five permanent members.

All nations which have decided to join the UN since its creation should be treated fairly and equally.

There shouldn’t be any special treatment, privilege or even power given to any of its members.

Therefore, the time has come for UN members to work together and act immediately to remove the veto provisions along with other provisions that can be interpreted as differentiating or giving special treatment to any particular member of the body from the existing UN charter, thus, making sure the UN stays relevant for many years to come.

Muzaffar Syah Mallow is an associate professor at the Faculty of Syariah and Laws (FSU) in Universiti Sains Islam Malaysia (USIM). Comments: letters@thesundaily.com