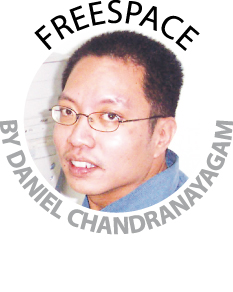 WE are now in the third part of the movement control order (MCO), which should end on April 28, unless further extended into May. I know a lot of people are feeling frustrated, disconnected, anxious, a whole gamut of emotions.

I personally lost the use of my mobile phone on the second day of the MCO, followed shortly by my laptop deciding to be difficult. Of course, in addition to this, my livelihood has been taken away, and I think it will be awhile before the fitness and yoga studios open again. So there is concern about making a living.

But this period of introspection has led me to spend a lot of time with my four cats, and made me miss my dog tremendously. He lives with my parents. As I watch my cats play, I came across a news article reporting what British primatologist, Jane Goodall, had to say about the Covid-19 situation.

“It’s also the animals who are hunted for food, sold in markets in Africa or in the meat market for wild animals in Asia, especially China, and our intensive farms where we cruelly crowd together billions of animals around the world. These are the conditions that create an opportunity for the viruses to jump from animals across the species barrier to humans,” she was reported to have said.

Goodall is of the opinion that mankind’s cruelty to the environment and animals is the major reason for this pandemic the world is experiencing right now. I agree.

She says: “Because as we destroy ... the forest ... the different species of animals in the forest are forced into a proximity and therefore diseases are being passed from one animal to another, and that second animal is then most likely to infect humans as it is forced into closer contact with humans.”

When I read this quote, I remembered a Taman Tun Dr Ismail resident ranting on social media about how the monkeys in her backyard were such pests, breaking into her kitchen to look for food and bothering her and her family. Well, excuse us for destroying their home to make room for yours!

Oftentimes, people have disregard for their environment and the animals that live around them. Disregard for animals can sometimes be as simple as having pets. Some adopt tick-and flea-ridden dogs and choose to do absolutely nothing about it but complain. When the ticks cause tick fever to the young and elderly humans in the household, it’s all the dog’s fault.

Disregard for animals and the environment has led to practically all recent pandemics.

For example, the Nipah virus we experienced in 1999 began with flying foxes.

This species evolved with the virus over millions of years. Because of this, they experience little more from it than a cold.

However, the virus is lethal once it jumps from the bats and into species that haven’t evolved with it, as we saw in 1999. It is believed that an infected bat dropped a piece of chewed fruit into a pig farm.

The pigs got infected, and the virus jumped to humans. The Nipah virus is incredibly lethal. Of the 276 people infected in Malaysia, 106 died, while others suffered permanent and crippling neurological disorders. There is no cure or vaccine.

Pandemics unsurprisingly have always come out of the forest and jungles. It has been found that deforestation of the Amazon jungle by about 4 % increased the malaria infections by nearly 50%.

Another example is AIDS, which crossed into humans from chimpanzees in the 1920s when bush-meat hunters in Africa killed and butchered them.

So now, in 2020, while humans suffer economic setbacks and are forced to stay at home, the rest of the world breathes a sigh of relief.

Carbon emissions have dropped, according to news reports, and the Klang River is apparently beginning to look pristine again.

Every morning I am actually woken up by the sounds of the birds chirping and not the sound of traffic on the highway next to me.

My hope is that this viral outbreak will cause us humans to pause and search within. I know many of us are already doing our part, but all of us need to come to the realisation that we share this world with other living beings.

Let us not be handed another virus in the future as a reminder of this.