US, China to keep talking on trade after little progress in Shanghai 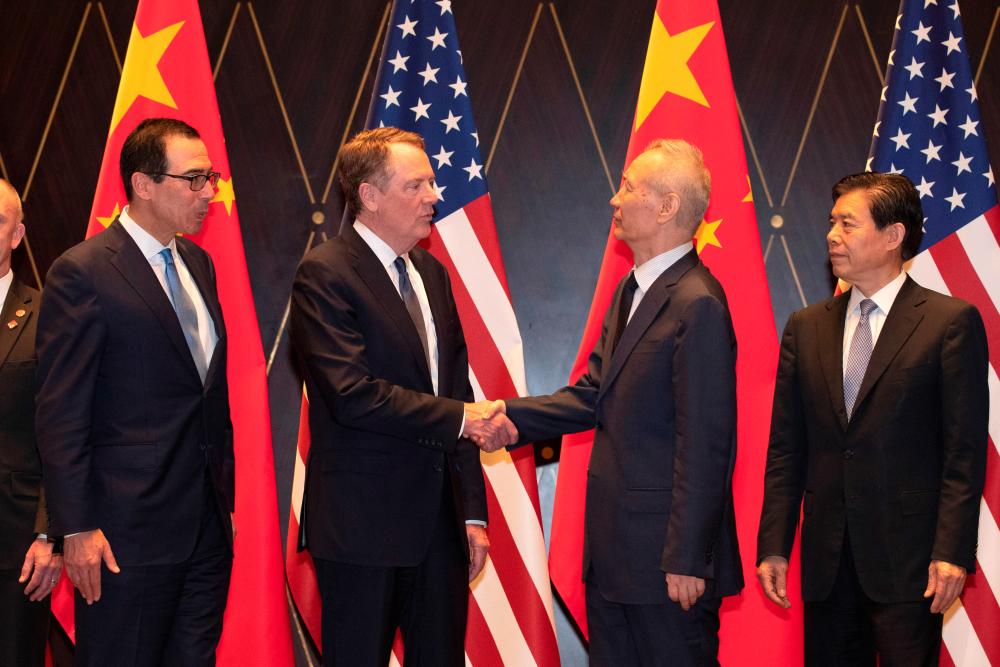 SHANGHAI/WASHINGTON: US and Chinese negotiators ended a brief round of trade talks on Wednesday with little sign of progress and agreed to meet again in September, prolonging an uneasy truce in a year-long trade war between the world’s two largest economies.

The talks were the first face-to-face meetings since US President Donald Trump and Chinese President Xi Jinping met in June and agreed to get negotiators back together to try to find a way out of the dispute.

The White House and China’s Commerce Ministry each described the meetings in Shanghai as constructive, but neither announced any agreements or goodwill gestures that might have cleared the path to more substantive future talks.

The two governments have levied billions of dollars of tariffs on each other’s goods, disrupting global supply chains and roiling financial markets. The International Monetary Fund has warned that the trade dispute will shave 0.2% off global output.

Concern that the lack of progress could point to a protracted trade war weighed on global markets on Wednesday.

Among goodwill gestures that had been expected to be discussed at the talks were Chinese purchases of US agricultural produce and US moves to relax restrictions on sales to Chinese telecommunications giant Huawei.

US Trade Representative Robert Lighthizer and Treasury Secretary Steven Mnuchin left China with little in hand save a pledge to keep talking, following a half-day meeting and a working dinner at Shanghai’s historic Fairmont Peace Hotel.

China’s Commerce Ministry said “both sides ... had a candid, highly effective, constructive and deep exchange on major trade and economic issues of mutual interest.” It said negotiators discussed more Chinese purchases of US agricultural products, but did not say there was any agreement to buy more.

The White House said China restated its commitment to buy more US farm goods and said negotiations on “an enforceable trade deal” would continue in Washington in early September, but gave no details about expected agricultural purchases.

Hu Xijin, editor-in-chief of China’s Communist Party-controlled Global Times, wrote on Twitter that the negotiators had discussed increasing purchases of US farm products, and the “US side agreed to create favourable conditions for it.”

Senator Chuck Grassley, a Republican from Iowa, one of the biggest exporters of corn and soybeans among US states, and chairman of the Senate Finance Committee, said he was not surprised that China was not more forthcoming about its plans.

“I don’t think you’re going to find that the Chinese ever let the world know that they decide to do something because the United States demanded it,“ he told reporters on Wednesday.

China’s Global Times urged Washington to follow through on its own promise to lift sanctions on Huawei Technologies Co Ltd to shore up the fragile trust between the two countries.

The US Commerce Department put Huawei on a national security blacklist in May, effectively banning US firms from selling to Huawei, a move that enraged Chinese officials.

Democratic Senator Charles Schumer on Wednesday raised concerns about a proposal that would allow 80% of Huawei products to continue being sold in the United States, and urged Trump to stick to tough sanctions on Huawei.

“It’s the best leverage we have, even better than the tariffs,“ he said. “China wants Huawei to dominate the world. They’ll find a way to do it unless we are tough as could be.”

The White House said in its statement that Chinese state subsidies, forced technology transfers and intellectual property violations were discussed. China’s account of the discussions did not mention any of these non-agricultural issues.

Trump on Tuesday warned China against waiting out his first term to finalize any trade deal, saying the outcome would be worse for China if he wins re-election in November 2020. His administration had wanted to avoid lengthy negotiations.

Chinese Foreign Ministry spokeswoman Hua Chunying told a news briefing that the United States is the one that continues to “flip-flop.”

“It’s pointless to tell others to take medication when you’re the one who is sick,“ she said.

Trump hoped to leverage a downturn in the Chinese economy to force China into a deal.

An official Chinese government survey released on Wednesday showed factory activity shrank for a straight third month in July, underlining the growing strains the dispute has placed on the world’s No. 2 economy.

Relations between the two governments have worsened since trade talks collapsed in May, when the United States said Beijing had reneged on commitments to make wide-ranging trade policy reforms.

The two sides are at odds over many issues beyond trade, including protests in Hong Kong and China’s maritime claims in the South China Sea. US authorities have stepped up prosecutions of Chinese citizens on espionage and other charges.

On Wednesday, US prosecutors announced the indictment of a high-profile Chinese billionaire for conspiring to evade US$1.8 billion (RM7.4 billion) of tariffs by smuggling huge amounts of aluminum into the United States. - Reuters