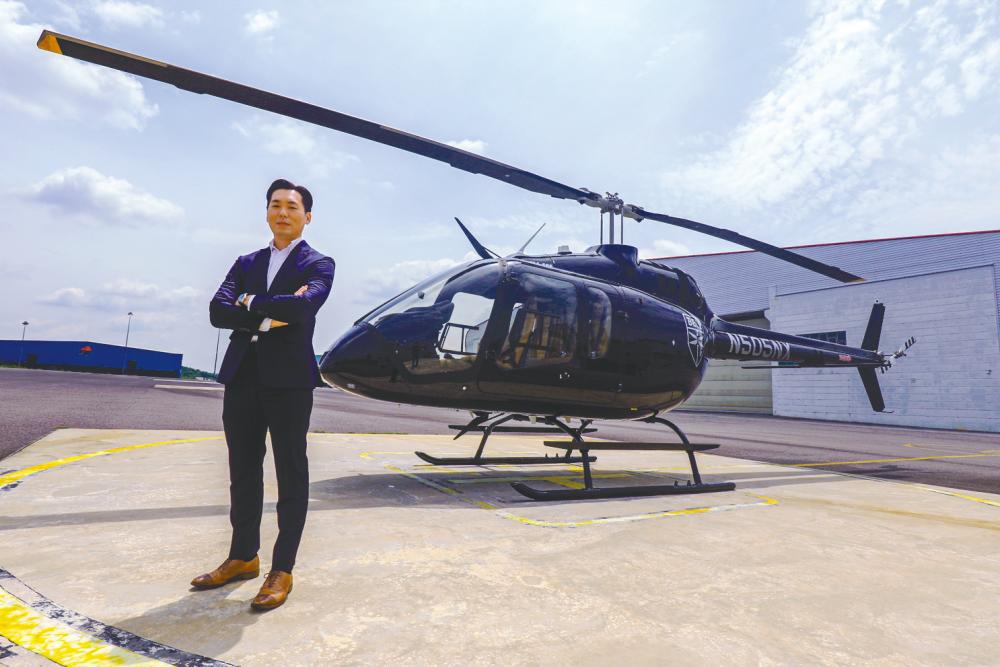 Ji says the Bell 505 is the right model to meet the demand in Malaysia - specifically for new entrants because it is an entry-level aircraft. – AMIRUL SYAFIQ/THESUN

SUBANG: Helicopter manufacturer Bell Textron Asia Pte Ltd is targeting a 20% market share in the short light single segment in Malaysia in three to five years, to be driven by its hero product, the Bell 505.

“Short light single” is a category used to define the type of helicopter – short refers to distance; light refers to the weight or payload; and single refers to the engine, which the 505 has only one.

Bell 505 regional sales manager for Southeast Asia and Oceania Benjamin Ji (pix) said the 505 is the most advanced short light single helicopter in the market.

“We can expect growth for Malaysia because there are more avenues and use of the helicopter. From military training, business to government-surveying jobs that require helicopters ... it’s a wide spectrum and the market use is there.

“It’s the latest model for Bell – we see it standing out compared with other models out there, also overcoming previous maintenance issues and downtime with easier maintainability,” he told SunBiz.

As of Aug 4, 2022, US-headquartered Bell Textron Inc – Bell Textron Asia’s parent company – has delivered 400 Bell 505 globally. The 505 is one of the company’s fastest growing products for corporate and VIP markets. As the demand for this aircraft increases, Bell has continued to introduce technologies for the 505, including an enhanced avionics suite and auto-pilot capabilities. The first Bell 505 was delivered in 2017.

Ji said that by early next year, Malaysia will have two Bell 505 and its plan is to convert both its existing customers and operators who do not fly Bell currently to using the 505. This is even before introducing new customers to this segment.

“The 505 is very much addressable to the market now. This is the right model that we’re looking at to meet the demand here – specifically for new entrant prospects, because it’s an entry-level aircraft. These are first timers trying to acquire, manage and own this aircraft, (hence) the price is more accommodative. It’s an easy-to-use aircraft and to pilot, and that resulted in our success with the new entrants.

“This aircraft, being versatile, allows different types of missions: utility works, ferrying passengers or conducting training for pilots. We see this uniquely in this class of aircraft. Operators or owners, at the end of it, are able to transit to other purposes or use after acquiring (the 505).”

Ji, who is based in Singapore, said over the past year, there has been a lot of increase in requests or enquiries mainly from executive business travel, corporates, and businesses using the 505 as a tool.

“In Malaysia, many businesses utilise it for real estate, plantation survey, and tourism and resorts. We’ve seen a remodelling of their businesses as they create ideas and ways to retain customers, so helicopter travel becomes part of their package that they’re looking for. We feel it is promising for the Malaysian market,” he added.

Ji sees Malaysia, a country with huge landscapes, following the trend in the Philippines, where many private owners are seen acquiring planes and helicopters. These are new entrants or non-aviators who never have a helicopter asset.

“The trend is shifting. Back then it’s always government agencies, (but) now we see that the commercial market is also getting into it. Previously it was just a small group of people, (but now the use case for the 505 is) providing the convenience to get them to remote places and businesses find value in them,” explained Ji.

He said that in Malaysia, good regulatory guidelines make it easy for customers or businesses to acquire helicopters and to obtain the licence and permit to operate aircraft.

“It’s a friendly environment to operate in. That regulatory piece being supportive helps grow the business and allows new entrants to come in to make use of this tool to travel.”